Breaking down the sale of Tropicana to Bally’s 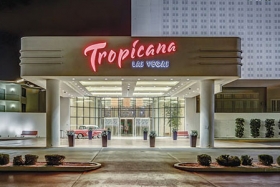 Last year Penn National Gaming (PNG) sold the land underneath the Tropicana to Gaming and Leisure Properties (GLPI). The company had been contemplating a sale of the entire property since buying Barstool Sports earlier in the year. The company has been spending much of its time transitioning from being just a casino operator to an online sports betting company with land-based casinos around the country.

The non-land assets of the Tropicana were recently sold to Bally’s Corporation. The company expects the deal to close in early 2022. You’ll have plenty of time to use PNG’s MyChoice Rewards on the Vegas Strip for a while. When the deal clears, your MyChoice connection to Sin City will be through M Resort in Henderson, NV – about 20 minutes from the heart of the Vegas Strip. This is one of the nicest off-strip properties in town.

The sale may be confusing to some on different levels so we’ll break it down so you understand who the new owners are and what this means to you. We’ll look at the deal itself before diving into the new owners of the Tropicana. The sale is somewhat complex and interesting as it involves casinos outside of Las Vegas.

Bally’s Corporation announced that it has agreed to purchase the Tropicana Las Vegas on April 13. Bally’s Corp. has nothing to do with Bally’s Las Vegas casino. We’ll explain that shortly. Bally’s Corp. is a company with land-based casinos and interactive entertainment.

Tropicana was purchased from GLPI in a transaction they value at approximately $308 million. Here’s where the deal gets complicated.

Bally’s and GLPI will also enter into two other sale-and-leaseback transactions outside of Las Vegas. The deals are related to Bally’s Black Hawk, CO, and Rock Island, IL casino properties. The cash purchase price of these properties is $150 million payable by GLPI.

Altogether, the transaction is expected to be compiled to Bally’s shareholders long-term and will require no cash outlay from Bally’s at closing. In other words, Bally’s gets the Tropicana for $0 thanks to its sale of the other land.

“Landing a preeminent spot on the Las Vegas Strip is a key step for us. The Strip is visited by over 40 million players and guests per year, which we believe will significantly enhance Bally’s customer base and player database, as well as unlock marketing opportunities to leverage the iconic Bally’s brand. This expansion will also support the growth and development of our online and interactive business. We look forward to exploring a significant redevelopment of the property, which we believe will enhance its financial profile.”

The deal between Bally’s Corp. and GLPI is expected to close in early 2022.

What is Bally’s Corp.?

What is Bally’s? This is the number one question I’ve been asked about the national casino operator.

Tourists in Atlantic City and Las Vegas think Bally’s is the name of a casino in both cities. Both of those casinos have different owners. That’s where this story begins.

Bally’s currently owns and manages 12 casinos across eight states, a horse racetrack, and 13 authorized OTB licenses in Colorado. The company is rapidly expanding and expects to manage 15 casinos in 11 states by early 2022.

Later this year Bally’s will roll out online sports betting (and DFS) along with traditional online casino gambling. The company also has a deal with the Sinclair TV company to brand their regional sports networks as Bally’s Sports. The company team up with Sinclair to promote this part of the business when it launches.

Caesars still owns the rights to use Bally’s Las Vegas for the property attached to Paris. There’s no inclination that Bally’s Corp. will change the name of Tropicana when it takes over next year.

Bottom line, there’s a lot of moving parts but nothing will happen to your Tropicana experience until next year.