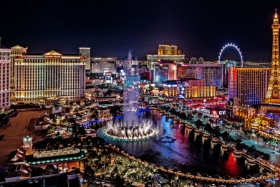 Las Vegas gets busier every day. The warmer weather is giving regional visitors another excuse to drive into town for a few days of fun. COVID-19 vaccinations encourage guests from around the country to fly once again. It’s almost as if the global pandemic is coming to an end.

Las Vegas is noticeably busier than any time in more than a year. The streets are full of tourists and the casinos are packed with gamblers. So many restaurants have lines of people waiting. Restaurants and bars are still operating under 50% capacity limits. This should be changing soon.

Nevada governmental officials will be revising capacity limits and restrictions for Nevada casinos, restaurants, bars, and shows by May 1. Between vaccinations and the continued opening of Las Vegas, even more, people will likely be visiting Las Vegas.

It’s probably been a while since you’ve booked a flight to Las Vegas or anywhere in the world. Airline policies have changed a lot over the past year or so. Thankfully, WalletHub is keeping track of changes and has some useful information on frequent flyer programs.

Here’s one major takeaway from this study:

Delta Air Lines, JetBlue Airways, Southwest Airlines, United Airlines, and Frontier Airlines are the five major airlines whose miles do not expire because of inactivity. This is huge after a year or more of not flying.

The prices of flights are seemingly increasing every day. Maximizing frequent flyer plans could be especially useful for anyone that hasn’t flown in more than a year.

Not everyone has the same needs from a frequent flyer program. It’s important to understand that this is a general scoring system used to offer a general overview. Individuals might have their own preferences.

According to WalletHub, these are the best frequent flyer programs:

These airlines have hubs at airports in some of the largest cities like New York/New Jersey, Atlanta, Philadelphia, and more.

Here are some key takeaways from the WalletHub study. The first highlight will likely affect most people who haven’t flown in more than a year.

Each of the top five Frequent Flyer programs better serves its customers in certain areas. Take a look:

Hopefully, this information will help you when booking your next flight to Las Vegas.