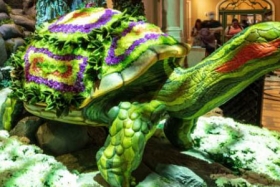 During my weeklong vacation at the Cosmopolitan, I realized that I could see into the Bellagio’s Conservatory and Botanical Gardens. That was pretty cool since I love this free attraction. Unfortunately, there was nothing to see. The horticulture team from Bellagio was setting up a new display that would debut after I left the comfy confines of the Vegas Strip. Maybe I’ll see something next time.

You can now see the debut of “Eco: A Season of Earthly Awareness” at Bellagio. The new exhibit pays homage to the elements needed for life to flourish. The summer display has more than 30,000 flowers and plants. The garden beds are artistically designed to represent earth, wind, water, and fire.

“As the world transitions into a bright new beginning this summer, we want to inspire people to preserve our home,” said Designer Ed Libby. “After a breathtaking journey through the rainforest filled with copious botanicals and colorful floral arrangements, visitors will be left with a newfound appreciation for our planet.”

“Eco: A Season of Earthly Awareness” is new to Bellagio and is on display through August 28, 2021. Before walking through the exhibit here are some fun data points:

Let’s take a virtual walk through the mystical “Eco: A Season of Earthly Awareness” at Bellagio.

This area represents the element of earth with the display of Gaia – The Goddess of Earth. Gaia is more than 22 feet tall! She’s draped in vines and crowned with flowers. This marks the sacred relationship she shares with humanity. 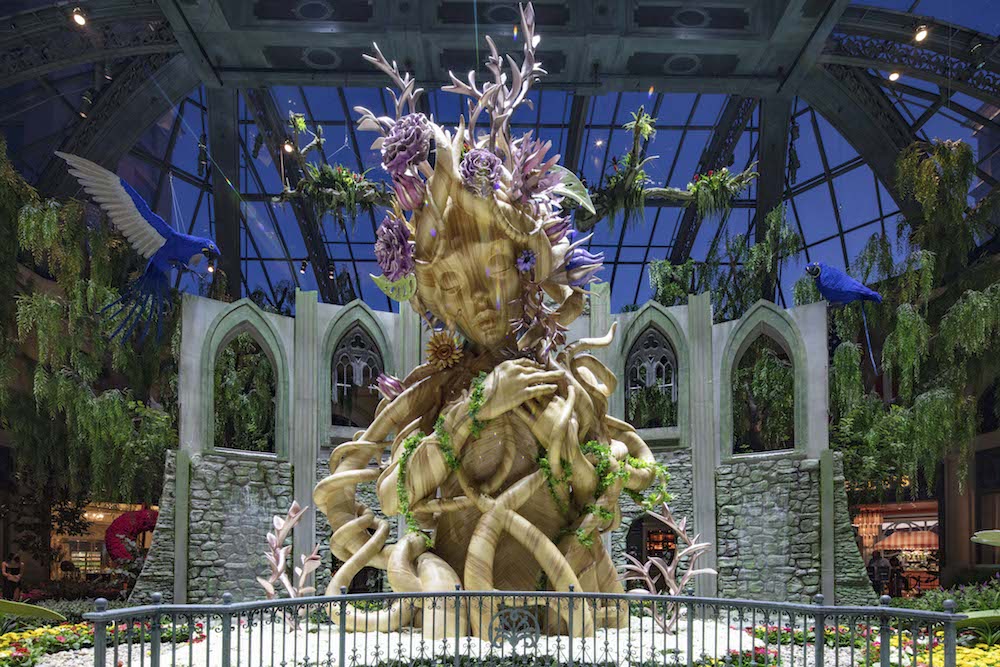 She’s flanked by two cascading waterfalls that flow from a cathedral ruin wall covered in moss. The garden is surrounded by blue Hyacinth macaws and two giant passion-flower blossoms. A great photo spot is by the Scarlet Ibis who stands at 10-feet tall.

The element of water is the feature here. There’s a large wall of vines, botanicals, and floral arrangements that descend from the ceiling. This is the beautiful backdrop for a Koi fish pond that also has streaming waterfalls and fountains.

Get the phone out again for more pictures. There are two vibrantly colored tree frogs on two rocks watching the crowd below. A turtle topiary with fresh-cut flowers in its shell greets guests at the corner of the garden bed. 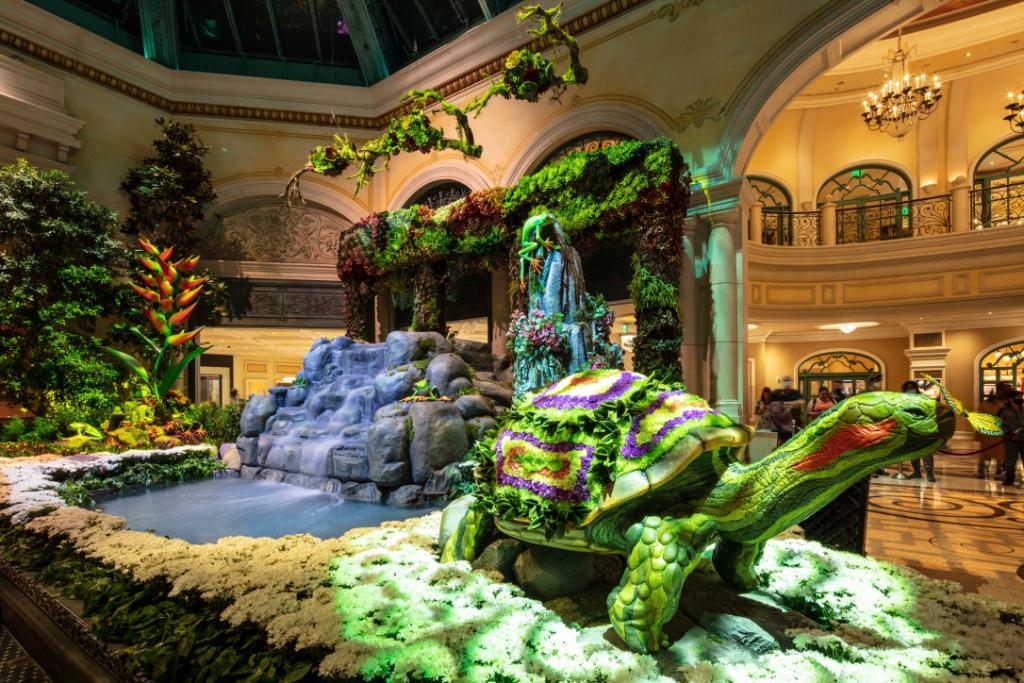 It’s now time to explore the section that represents the element of air. This is the middle of the exhibit and typically where guests start moving slowly. A two-story treehouse towers over the garden in this section. Guests will walk underneath the structure to catch a glimpse of a cozy retreat. 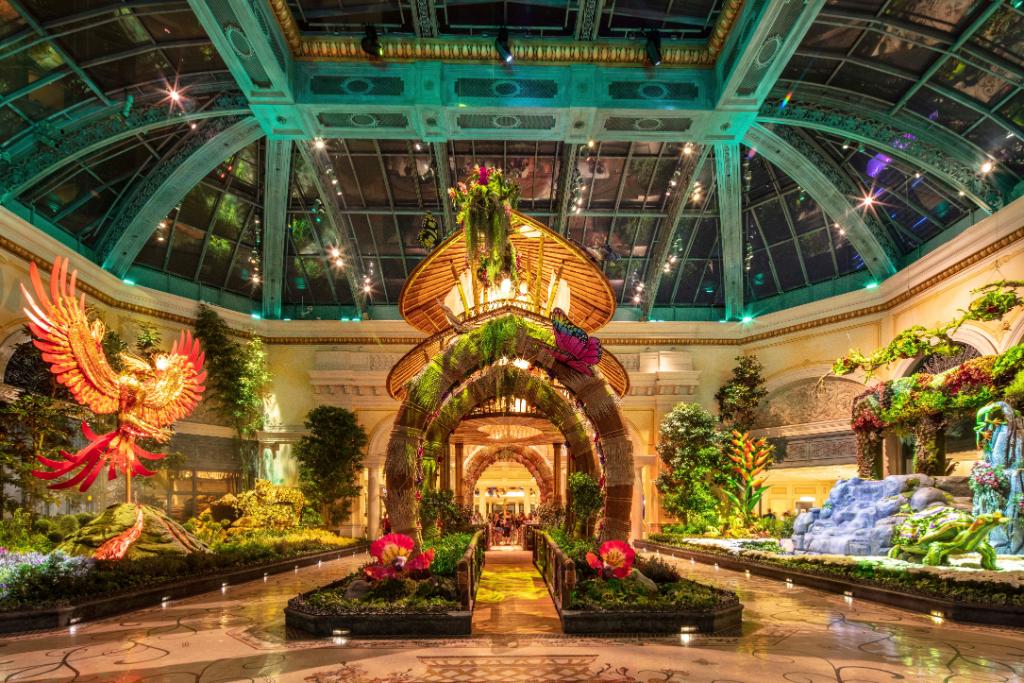 A wooden plank walkway spans two parts of the rainforest. This connects guests to the next part of the journey through the exhibit. Arches designed with botanicals, tree frogs, and exotic butterfly sculptures offer astounding views and a great backdrop for more pictures and videos. 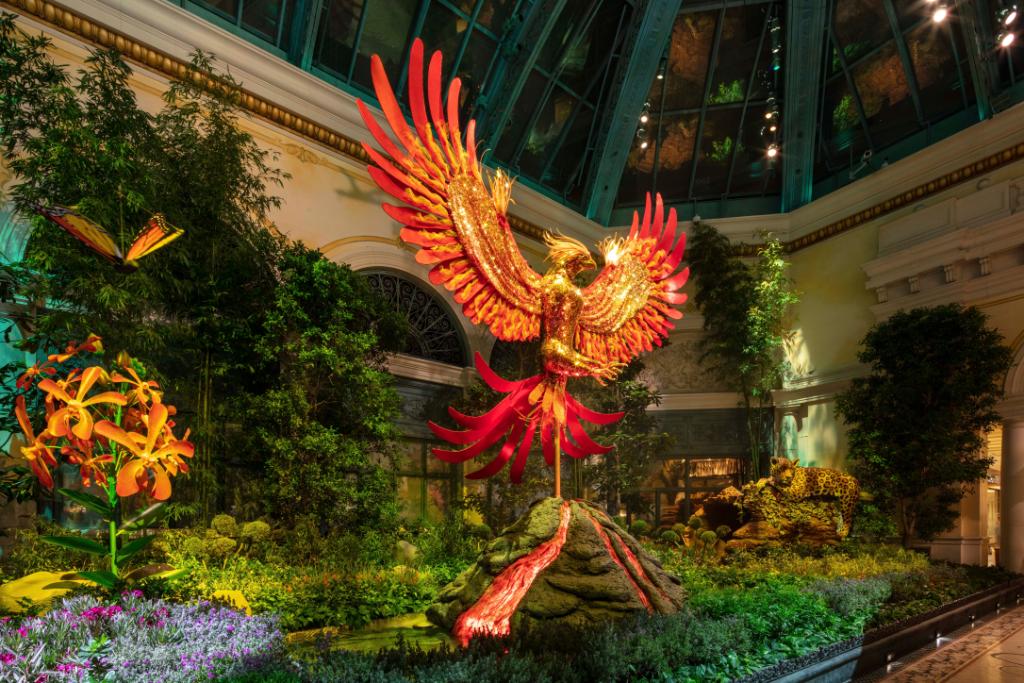 The final leg of the new summer display pays tribute to the element of fire. A Phoenix rises from the ashes and is the focal point of this area. The Phoenix flies above a volcano spewing steam and molten lava. On the way out you’ll see a jaguar on a tree branch and a large 3D-printed lady slipper orchids lying between begonia leaves.