by marc / Thursday, 19 August 2021 / Blog Category: Entertainment and Everything Vegas. 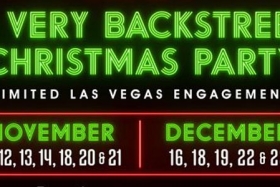 It’s time to start thinking about making holiday plans again. This season was a bit of a mess for many people last year. It appears as though we might have a slightly more normal holiday season this year. The venues inside Las Vegas casinos aren’t wasting any time getting ready.

While shows are still ramping up, there are holiday events already being planned. Prior to Resorts World Las Vegas opening, the property revealed that the residencies for Celine Dion and Katy Perry would take place in November and December. Usher scheduled a few of his residency shows at Caesars Palace for the week between Christmas and New Year’s Day. More individual shows and residencies are being announced regularly.

Holiday shows are just being announced. Expect to hear more soon. For the time being there are two New Year’s Eve shows. One of the groups will actually play on the first night of 2022.

The Backstreet Boys residency at Planet is a new announcement. However, performers scheduled before the COVID-19 pandemic are finally hitting the stage at Zappos Theater. Gwen Stefani’s “Just A Girl” and Shania Twain’s “Let’s Go!” will both begin before the holiday season.

Fans of the Scorpions can actually jam with band members at Rock N Roll Fantasy Camp next year. There will be a handful of members from other 80′s rock and heavy metal bands mentoring and participating in the event.