7 Conventions To Avoid In Las Vegas And Save Money 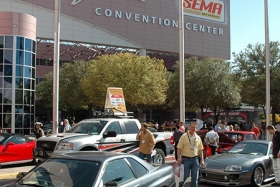 We’re always looking for ways to save money when visiting Las Vegas. Most of the tips we share involve cheap or free things to do once you’re in Las Vegas. However, there are more than a few times a year when you’ll want to stay away from Las Vegas. Prices for hotel rooms skyrocket when the casino operators expect it to be busy.

Most vacation planners know that holidays, concerts and major sporting events will often be the cause for higher hotel room prices. In Las Vegas, there are a handful of major events that pack hotels which the public will never think about. Unless you visit for a convention, you may never think about Las Vegas being one of the biggest cities in America for conventions. Many of these conventions aren’t covered by mainstream media so you’ll never know they exist.

I’m often asked why hotel rooms on certain dates in Las Vegas are crazy expensive. The answer is almost always because a convention is in town. I’m about to bestow one a link I share every year that should help you save money when visiting Las Vegas. This website by Las Vegas Tourism lists all conventions coming to Las Vegas. The list is a full year calendar so you can do advanced planning if you need.

Almost every convention will affect hotel prices in Las Vegas. Smaller conventions might only affect the host hotel. For example, the “Off-Price Specialist Show” at The Venetian is expected to have 11,500 attendees in February. By ordinary standards, this is a lot of people. However, that’s really just another day in Las Vegas. This convention should only affect hotel room prices at The Venetian, The Palazzo and maybe nearby hotels.

The following conventions are massive and will affect the price of just about every hotel room in Las Vegas.

This is one of the largest convention of the year in Las Vegas with approximately 200,000 attendees. CES not only caters to the electronics industry but to all industries who work with any form of technology and the media who cover the event. This is typically one of the busiest weeks in Las Vegas. Not only are hotel room rates high but restaurants, shows, and nightclubs are packed.

Just over 100,000 people attend NAB every year. This is one of the busy but not insanely busy conventions in Las Vegas. Chances are good that you’ll run into an attendee of the convention while getting coffee in the morning or a drink at night. Hotel prices during NAB are higher than normal but not super expensive like CES or Con/Agg.

Without a doubt this is the convention that throws visitors to Las Vegas for a loop. The auto industry is huge and the aftermarket industry is a large part of that. Think about every penny you spend on your car after purchasing it. In brief that’s what’s on display at this expo. There will be approximately 150,000 people at the Sands Expo Center. Yes, unlike many other large shows, everyone attending will be on the Vegas Strip.

The SHOT Show brings about 65,000 people to the Sands Expo Center at The Venetian and World of Concrete brings another 60,000 people to the Las Vegas Convention Center. Together these two shows bring as many people as the larger shows above. Las Vegas may not seem too busy because the attendees are spread out. However, these people all have to sleep somewhere. Hotel rooms will be at a premium when these two conventions are in Las Vegas at the same time.