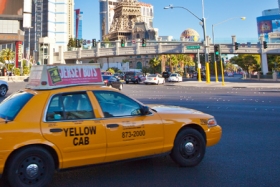 Most long hauling takes place from McCarran Airport to the hotels in and around the Vegas Strip. The reason for this is twofold – A. You’ve just landed in Las Vegas and you’re ready to party and don’t care how much the cab costs and/or B. You’re new to Las Vegas and have no idea how much a cab should cost.

There are many ways to go about avoiding long hauling but here are a few of my favorite tips on how not to get long hauled when you visit Las Vegas.

1. Tell the taxi driver not to take the tunnel to your hotel. The tunnel brings you to the freeway which costs more money. Saying “No Tunnel” is always a signal to the cab driver that you know about their scam. Alternately you can just tell the driver to take go to the strip by the streets.

2. Know before you go. There are many websites that offer estimated taxi fares in Las Vegas so you know how much you should be paying.

3. Act as if you’ve been here before. Don’t lead on that you’re new in town or on vacation for the first time. The sign of fresh blood is too appealing. Taxi drivers don’t prey on people from Las Vegas.

4. One commenter on Vegas Chatter just hands the driver a $20 no matter what the meter says.

If you do get long hauled please file a report so that the taxi driver is reprimanded and the next visitor to Las Vegas doesn’t get overcharged by this person. You can file reports on the Nevada Taxicab Authority website so you don’t have to confront the taxi driver if you’re not comfortable doing so. The forms are fairly detailed but the important things to get from the taxi are photos, license plate numbers, taxi driver name and license number and the name of the taxicab company.

For full disclosure long hauling isn’t always a bad thing. Sometimes there is a reason to go out of the way to get from point A to point B. There’s so much construction happening in Las Vegas right now that you may be okay paying more money to reach your destination quicker. Still, your taxi driver should know ways to avoid the mess most of the time.

Long hauling taxi drivers in Las Vegas is really a disgusting practice but it’s happening and we all have to deal with it. I’ve highlighted some ways to avoid being long hauled and what to do if it does happen to you. Taxis are one of the best ways to get around Las Vegas so we really can’t avoid them. Being aware that some taxi drivers are looking to rip you off may save you enough money for a drink or two and there’s nothing wrong with that.