A Closer Look At The Miracle Mile Shops 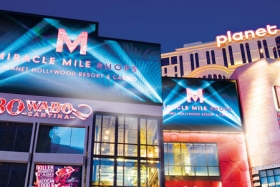 I recently visited the Miracle Mile Shops at Planet Hollywood for the first time in a while. I visit Planet Hollywood pretty often but don’t venture too deep into the shops. This recent visit was to meet some friends for lunch at Nacho Daddy, so I walked through the mall just to check out the scene.

Deals at the Miracle Mile Shops

They have a couple of locations for ABC Stores. These stores are kind of like smaller drug stores without drugs. They have cheaper snacks, drinks, and souvenirs than the gift shop inside the casino.

Sign up for the mailing list to receive a coupon book with up to $2,000 in savings. Visit miraclemileshopslv.com and scroll to the bottom of the page. After signing up you’ll receive to show the Customer Service Desk near the Zappos Theater to receive your book of discounts. AAA members can skip signing up and just show a AAA card to the person working at the desk.

About The Miracle Mile Shops

There are two kinds of shopping experiences on the Vegas Strip. A mall such as Crystals next to Aria is focused on luxury retailers and restaurants. This serves the affluent Las Vegas visitors.

The Miracle Mile Shops is a mall for everyone not looking to spend their rent money on a new bag or blazer. In addition to popular mall retailers, there are several shops geared towards Las Vegas. More than 60 retail outlets opened their first Las Vegas location at the Miracle Mile Shops.

One of the benefits of staying at Planet Hollywood is the access to the mall. Shopping may not be for everyone but that’s only part of the retail options. Altogether there is a total of more than 200 places to eat, drink, shop, and be entertained.

There plenty of restaurants and bars and they’re often priced below what you’d expect to pay at a restaurant on the Vegas Strip. Malls on the Vegas Strip typically have less expensive prices. The Miracle Mile Shops is no different and its venues try a little harder with a plethora of specials.

During my walk through the mall the other day I noticed that Blondies has a $20 All-You-Can-Drink happy hour and La Cantina has a $5 breakfast special. There were more signs for specials that I didn’t grab a picture of because I was on my way to meet someone.

Entertainment Inside The Miracle Mile Shops

There are two theaters with entertainment inside the Miracle Mile Shops. The Zappos Theater is probably the more popular of the two venues. They have concerts throughout the year. This is also where Planet Hollywood residencies take place.

The Saxe Theater is home to shows like “Vegas! The Show.” While this isn’t the most well-known show in Sin City, they’ve put on more than 3,500 performances. The theater is also home to Zombie Burlesque if you’re looking for something a little different.

Planet Hollywood is the popular casino-resort attached to the Miracle Shops. This isn’t the only hotel with direct access to the mall. Elara by Hilton Grand Vacations opens directly into the Miracle Mile Shops.

Elara was originally designed to be a building with condominiums. It’s now a timeshare/hotel. Elara doesn’t have traditional hotel rooms since they were designed for people to live in. They have affordable suites with as many as four bedrooms.