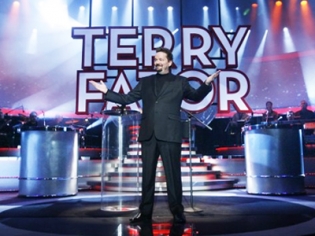 Located inside of his very own theater at The Mirage Las Vegas, Terry Fator: The Voice of Entertainment is a one-of-a-kind show that mixes elements of “America’s Got Talent” winner Terry Fator’s unparalleled ventriloquism, spot-on celebrity impressions and a musical set accompanied by a live, seven-piece band that offers humorous takes on artists such as Cher, Maroon 5 and Garth Brooks.

Realizing a lifelong dream, Terry Fator finally got a chance to perform his unique brand of entertainment that includes mind-blowing ventriloquism and impeccable celebrity impersonations when he signed a multi-year deal with The Mirage after winning a season of “America’s Got Talent.” Winning that competition sky-rocketed Fator’s career from playing in small clubs to immediate worldwide exposure that included appearances on “The Today Show,” “The Oprah Winfrey Show,” “The Ellen DeGeneres Show” and “The Tonight Show with David Letterman.”

Since then, Terry Fator has been voted “Best Impressionist” by Las Vegas Weekly’s Vegas’ Best, and he continues to stun audiences with his unmatched skill as a ventriloquist and spot-on celebrity impressions all backed by a seven-piece live band inside of his very own theater at the Mirage. With his show, Terry Fator: Ventriloquism in Concert live at The Mirage, Fator brings to life the unique personalities of his created characters including Winston, the impersonating turtle, the affable Emma Taylor and the most recent addition Wrex, a crash test dummy.

When it comes to Las Vegas live entertainment, Terry Fator: The Voice of Entertainment live at The Mirage is a one-of-a-kind, must-see show that not only blends Fator’s superb ventriloquism skill with fantastic celebrity impressions, but also includes musical performances that offer the “America’s Got Talent” winner’s hilarious takes on artists such as Elvis Presley, Garth Brooks, Cher and many more.