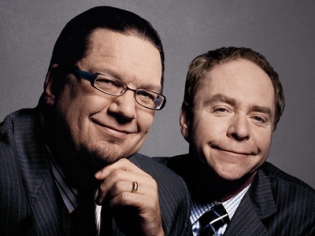 You won't want to miss Penn and Teller at the Rio Hotel and Casino. This is a fun night of comedy, magic and entertainment. Save up to $35 per ticket OR save up to $11 + a free upgrade.

Reserve online for a discount to see the famous Penn & Teller at Rio Las Vegas. Save up $37 off rates to this legendary performance today. Discount is for Mezzanine seating options.

With over 30 years of performing under their belts, Penn & Teller are one of the best duos in all of Las Vegas show business. Their routine at the Rio is filled with energy, comedy and some of the most mystifying magic that you will ever see. The pair even goes so far as to give audiences a behind-the-scenes look at some of the most common tricks that they perform, only to leave spectators stunned with others.

Penn and Teller take the typical Las Vegas magic show, and turn it on its ear. With edgy humor and mystifying illusions, the long-lived duo brings an unparalleled experience to Las Vegas audiences at the Rio.

Penn and Teller have been performing together for over 30 years now and have solidified themselves as a bona fide hit in Las Vegas. Penn acts as the host during the pair’s show and provides the comedic element throughout, while Teller fuels much of the show’s action albeit without saying a single word. Penn & Teller’s masterful interaction with each other as well as their audience is what creates such an energetic and highly addictive spectacle. Much of their performance is also reliant on audience interaction with volunteers being requested throughout the show.

Penn and Teller at the Rio is sure to be a magic experience that you won’t find anywhere else. They even dissect certain tricks and give audiences a behind-the-scenes look at others – a practice that was once considered a faux pas. It’s edgy routines and wily comic relief that makes Penn & Teller’s show so appealing and separates it from the typical fare. The duo literally end every show with a bang with a mind-blowing illusion in which Penn & Teller simultaneously fire guns at one another and catch the bullets in their teeth. It is a fabulous trick that will leave you in awe and realize that even with all of their zany antics, these two really perform magic at the highest level.