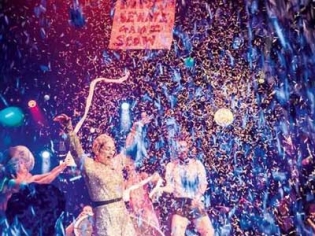 See The Miss Behave Gameshow at a great price.  Tickets start at just $42.

An irreverent variety show that gets confused and thinks it’s a game show one minute and a disco party the next. It’s an incredible mix of chaos, fun and hilarity.

Let the games begin!  Enjoy the ultimate Vegas game show hosted by Miss Behave.  This show has been touring worldwide in places like Hong Kong, Australia and New Zealand.  She has been on the Tonight Show and was even thrown off of Britain’s Got Talent for being a bit too raunchy!  As the Queen of Cabaret, Miss Behave is the ultimate game show host who dispenses points, makes up the rules and gives out prizes.  The audience is divided into two teams for challenges often based around cellphones.  Get ready for games like Dial my Number the Quickest, Sit on a Seat and Porn I’ll Admit to.  The chaos ensues with audience members interacting with hilarious results.