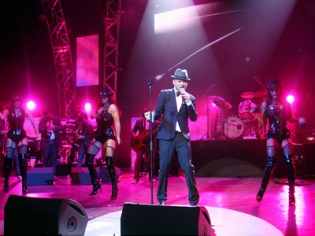 Step into the sultry atmosphere created by Matt Goss and his multi-piece band and backup singers. Matt Goss and his nine piece band fill the venue with familiar songs like “Luck be a Lady,” “Superstition” and “Hotel California.”  While cover songs bring the audience back to the days of vintage Vegas, Goss’ original tunes make up a large part of the show.  An accomplished singer in his own right, Goss has sold over 17 million records worldwide and plays the piano and guitar also.

Blue eyes and a smooth voice will draw comparisons to Frank Sinatra and Goss does a tribute to the RatPack during the show.  The small venue allows Matt Goss to interact with the crowd and when the show is over he often remains for a cocktail or two and to schmooze with the fans. Don’t miss your chance to see the “New King of Vegas.”

New dates are added periodically so check back for updates.