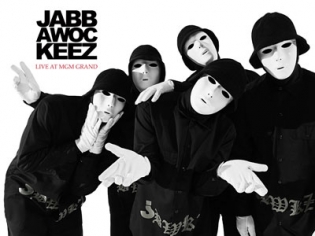 Get your Jabbawockeez Live at MGM Grand Tickets today! Enjoy this amazing show, that you won't want to miss. Buy now and get the best rates by booking here! Get your tickets from just $59 before taxes and fees.

Jabbawockeez is a faceless dance crew. In white masks and gloves, the Jabbawockeez create visual representations of music. You've got to see this! Rates start at just $63 before discount, fees and taxes. No minimum purchase required.

Book your tickets direct at the MGM Box Office and save. See Jabbawockeez from $50 before fees and taxes when you book online now.

The cutting-edge dance crew Jabbawockeez mixes elements of theatre with hip-hop dancing to create a performance that showcases their raw talent while donning all-black outfits and white masks.

Forming in 2003, the Jabbawockeez made their breakthrough in 2008 after winning MTV’s “America’s Best Dance Crew.” Since then they have received global attention and appeared in numerous TV shows and commercials.

The Jabbawockeez perform routines in amazing synchronicity and don all-black outfits with white masks – not to conceal their true identity, but rather to keep audiences focused on their performance as a group instead of individuals. Their cutting-edge, hip-hop dance style and expressive, theatrical performances are what sets them apart and makes Jabbawockeez one of the best choreographed dance shows Las Vegas has to offer.

Their show at MGM Grand is a breathtaking mix of the talents that originally got them noticed, as well as routines featuring normal human interactions broken down into performance pieces that use elements of their hip-hop and breakdancing to tell the story without words. The brilliance of a Jabbawockeez performance is one that has to be witnessed in person to truly understand what it is that makes these performers and this show so special – you won’t be disappointed.