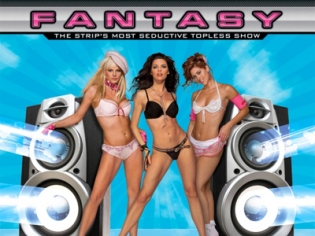 Fantasy is a dynamic topless revue. The women of Fantasy almost bare it all in a variety of sultry costumes and high-energy dance numbers. Get Exclusive Rates to see Fantasy at Luxor Las Vegas. Rates start at just $46 before discount, taxes/fees.

Fantasy is a topless, all-girl revue with a twist. The show features a male comedian/impressionist and a beautiful female lead singer that both perform in between and during sensual routines that are sure to please any man’s fantasy.

Throughout the duration of this sensual all-girl revue, the ladies of Fantasy perform sexy, topless routines that will have you fighting the urge to blink. Themed routines include a cowboy segment complete with the girls in sexy chaps and thongs as well as another piece where they’re dressed as naughty police officers. Not much is left to the imagination as these girls explore the wildest fantasies in ways that are sure to please any man.