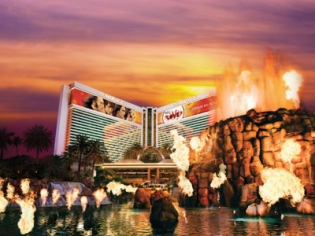 Treat yourself to a Spring indulgence package at over three hundred restaurants, bars, lounges, and nightlife across participating MGM Resorts Las Vegas destinations. Receive a $50 Food and Beverage credit each night of your stay.

AAA Members are invited to take advantage of this exclusive promotion at the Mirage. Reserve your room online now and save up to 10% off rates as a AAA member today. AAA Membership must be presented at check-in.

Book now to save with the flex rate discount at the Mirage Las Vegas. No minimum night stay required.

Military Members save up to 10% off rates when you book online with this offer.  Must present Military I.D. at Check-in to receive discounted rate.

The Mirage is a tropical oasis in the desert, a half mile from the Fashion Show Mall. It boasts waterfalls, volcanoes, a dolphin habitat and Siegfried and Roy’s Secret Garden. Truly a paradise with coconut groves, pools and a 20,000 gallon saltwater aquarium, the Mirage continually sets the highest luxury hotel standards.

The Mirage is one of the legendary properties in Las Vegas; it was a pioneer in the gaming and hospitality industry and still leads the way as an outpost of refinement and sophistication. Guest rooms are spacious, suites are luxurious and the Villas are beyond your wildest dreams! Semi-canopied beds grace each bedroom as do marble bathrooms and designer toiletries. A tropical oasis awaits you as you enter the property, starting with the volcano out front, an aquarium and atrium in the lobby, and waterfalls and pools in the coconut grove outside.

One of the highlights is the Secret Garden, home to the dolphin habitat and the wildcat preserve. Watch the dolphins play in their pool and then gawk over the beauty of the rare black and white striped tigers, white blue-eyed tigers and black panthers. Enjoy Cirque du Soleil’s “The Beatles LOVE” entertainment experience, a ventriloquist show by Terry Fator or one of the many special events at the Mirage. When dining, you have a diverse choice of restaurants from California Pizza Kitchen to Carnegie Deli to STACK and Otoro. No matter your choice, you are sure to be delighted with the menu. Nightlife can start at 1 OAK and end at the Rhumbar with many fun stops in between. Of course, the casino is always open for your entertainment pleasure as well! Relax at the spa and salon for a way to rev up for the next night’s fun, for the party never stops in Vegas. Hang poolside at the family or adult pools and enjoy the fabulous Vegas weather. No matter your choice, a good time is no mirage at the Mirage!

Spa/Salon: A classy, modern-chic interpretation of a spa experience, the Spa offers massage, body treatments and facials that will relax and calm you. Men can enjoy the “Black Tie Affair” while women prefer the Sweet Red Rose facial and Ginger Lime body treatment. For superstar treatment, continue into the Kim Vo Salon for designer hairstyling, coloring or nail services.

Pool: The lagoon-style family pool is nestled in a coconut grove with grottoes and waterfalls, while featuring a 1/4 mile “shoreline” entry. Also in the grove is a children’s pool and a spa tub. For more adventurous adults, the secluded pool “Bare” is a topless venue for adults only. Poolside cabanas include flat-screen TV’s, Bose radios and misting systems. Paradise Cafe and the Dolphin Bar offer food and drink service.

Shopping: A variety of elegant boutiques offer a wide array of unique gifts and designer apparel. Shops include: The Beatles Shop, the Watch Boutique, Starlight Tattoo, Paradiso, The Art of Music and Optica.

Delight your eyes with a rainbow of colorful, tropical fish at the Mirage Aquarium right inside the Mirage Hotel-Casino. In the lobby you will see the enormous aquarium with exotic creatures swimming the beautiful coral reef.

Gorgeous, lush tropical gardens will surround you and welcome you into the Mirage Hotel and Casino. A tropical paradise in the middle of the desert is something that deserves exploring. Enjoy the tranquility of it all.

Enjoy white lions, white tigers, panthers, leopards and a family of Bottlenose Dolphins right at the Mirage. New features include paint with a dolphin, yoga with the dolphins or be the trainer for a day.

The volcano now features a lake full of computerized flame throwers set to the music of The Grateful Dead’s Mickey Hart. The jungle drum soundtrack mixed with the heat and excitement makes for an unforgettable 15 minute experience.

Appearing for a series of shows at the Terry Fator Theater at Mirage, Boyz II Men will perform their monumental 90’s hits, as well as new material from the latest album.

Aces of Comedy brings George Lopez to the Terry Fator Theater at Mirage for a limited run of heavy-hitting comedic performances.

Appearing at the Mirage at part of the Aces of Comedy series, Ray Romano and David Spade will entertain you with an evening of banter.

Ron White is best known from the Blue Collar Comedy Tour, but is also an author, Grammy nominee and TV performer. Known for performing with his trademark cigar and scotch in hand, he will regale you with southern humor about his life.

Located inside of his very own theater at The Mirage Las Vegas, Terry Fator: The Voice of Entertainment is a one-of-a-kind show that mixes elements of "America's Got Talent" winner Terry Fator’s unparalleled ventriloquism, spot-on celebrity impressions and a musical set accompanied by a live, seven-piece band that offers humorous takes on artists such as Cher, Maroon 5 and Garth Brooks.

Fueled by almost 30 of the Beatles’ most iconic hits, LOVE takes audiences on a journey through the history of one of rock ‘n’ roll’s most influential bands with stunning acrobatics and psychedelic imagery.

1 OAK is a New York-style nightclub at the Mirage that has state-of-the-art audiovisuals, celebrity guests and DJ’s that know how to keep the party vibe alive. The club has two separate rooms, each with their own party style. Enjoy this one-of-a-kind adventure.

Mirage’s Bare Pool Lounge is the ultimate day club. This is a sexy pool atmosphere that is known for their impeccable service, plush surroundings, inspired cocktails and European style sunbathing. Sit back and enjoy the beauty.

Combine your choice of frozen yogurt and toppings for dessert or add a waffle or crepe and make it a meal. Blizz also gives you the option to turn your yogurt into smoothies or shakes, or indulge in cakes or pies. All the yogurt is fat-free and there are also several no-sugar-added options.

Don’t let the name fool you, this is way more than a pizza restaurant. Offering creative toppings for pizza, specialty salads and pastas, CPK is known for its California style menu items.

The first thing you notice is that this branch of the Carnegie Deli looks like the original one. It tastes like you’re in New York, with authentic breads, meats and side dishes, and burgers made …

You’ll feel like a world traveler as you move among the 11 stations, while at the same time taking in the multiple TV's showing cooking programs. In addition to the usual buffet offerings, you’ll also find carving, barbeque, raw and deli stations.

LVB Burgers puts an exciting new twist on the good old American burger place. You’ll find versions of traditional beef burgers as well as white meat, exotic meat, fish and vegetarian choices. Complement these with any number of toppings from a long list.

Osteria Costa is a casual dining venue at the Mirage.  You will feel as though you are visiting the Amalfi Coast with the bright décor and rustic touches reminiscent of the picturesque villages that dot …

You will be drawn into the Otoro Robata Grill because of the wonderful smells emanating from the interior.  The sizzle and aroma of the grill are only the beginning.  Try the sushi which is so …

Serving breakfast all the time, the Pantry is open all day, every day to fill your cravings for a quick meal. An additional menu offering salads, burgers, sandwiches and larger entrees with sides, soups, appetizers …

Whether you’re already in the pool area, or just want to take in the view, the Paradise Café offers exotic drinks and light fare. Open for breakfast and lunch, the menu offers favorites like Eggs Benedict and breakfast burritos.

STACK offers contemporary American cuisine with an innovative twist. The interpretations of popular American favorites, prepared and presented imaginatively will tempt even the finickiest of eaters.

Who doesn’t need a pick-me-up while in Vegas? Well, look no further than your convenient local Starbucks. Enjoy Starbuck's when at the Mirage in Las Vegas. Starbuck's world-famous brewed coffee, hand-crafted espresso beverages, indulgent Frappuccino®, ice blended beverages, tantalizing Tazo® tea and whole bean coffee are only steps away.

The Roasted Bean is a convenient place to grab coffee and a snack, away from the casino floor and near the entrance to the convention area. Enjoy fresh pastries and sandwiches while feeling as though you’re at an outdoor French bistro.

Craft beer, cocktails, mouth watering food, 27 very large flat screen TV”s… is this the ultimate man cave? Check out the Airstream trailer in the heart of the restaurant that has been converted into Bud …

Acclaimed New York chef Tom Colicchio brings cooking with fire to the Las Vegas Strip by preparing meats over open flame. Meats range from steak to lamb to duck and are prepared in various ways from charcoal grills to wood-burning ovens.