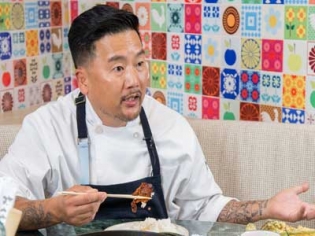 Roy Choi, who started out in a food truck, has made a name for himself in LA and has now opened a restaurant in Las Vegas.  Bringing the best of Koreatown with a definite Vegas swag, Best Friend brings you flavors he has been cooking up for years.  Of course he has his famous fried bologna sandwich made with Swiss cheese but adds some new dishes as well.  Try the Fritto Misto Rogers, the SoonDubu Hot Pot or his Tamarind Cod Hot Pot.  the menu has BBQ, LA Sh*t, Pots for the Table, Large Format Bowls and Banchan sections.  The menu is also loaded with photos from Choi’s past and the soundtrack to the restaurant features LA based music and LA based DJ’s perform occasionally.  Enter the restaurant and it is a flashback to the 90′s and you leave feeling like you reunited with your best friend!