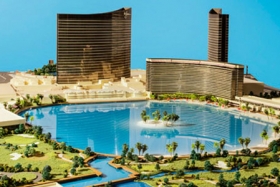 “Las Vegas Ain’t What It Used To Be.”

This is a true statement. Bad news, few things are what they used to be. Even as Las Vegas evolves there’s one thing that remains – extravagance. Even the statues in Las Vegas, like Bliss Dance at The Park, are over the top. The new expansion being planned for Wynn Las Vegas may be “new Vegas.” However, it’s as extravagant as any idea you may have seen in Las Vegas in the past 30 years.

Wynn Paradise Park is one of the most outrageous ideas from the brilliant mind of Steve Wynn. This is the man who brought us beautiful and groundbreaking casino resorts. The Mirage, Bellagio and, of course, Wynn Las Vegas are icons of Las Vegas.

The expansion of Wynn Las Vegas is farther out there than you’d ever imagine. The Mirage has a volcano right on the Vegas Strip. Bellagio has a massive lake and extravagant fountain show. None of this compares close to this plan for Wynn Las Vegas.

Earlier this year at an investor conference Steve Wynn and Wynn Resorts discussed plans for expansion.This new entertainment destination would be built around a first-ever recreational lake concept on the Vegas Strip. The concept is tentatively called Wynn Paradise Park. It will cost somewhere around $1.5 billion and is subject to approval by the company’s Board of Directors.

The plan for Wynn Paradise Park calls for a 38-acre lagoon, surrounded by meetings and convention space, a 1,000 room hotel tower, a small casino and extensive dining and nightlife. The expansion will be constructed on approximately 130 acres of real estate that is currently home to the Wynn Golf Club.

You might be wrong if you’re thinking that a 38-acre lagoon in the desert is an abuse of the limited water in the area. The manufacturers of the lagoon say that it will use less water than an 18 hole golf course. The proposed lagoon will be surrounded by a white sand beach and boardwalk. The lagoon will feature an array of daytime activities including water skiing, paddle boarding and parasailing.

The lagoon is rumored to have an island. The Island will feature an eight-story-tall King Kong-like creature. There’s more, he’ll make an appearance every day before water shows.

“We have a chance to reinvent Las Vegas and make the whole venue an entertainment attraction…an idyllic beach paradise surrounded by white sand beaches,” said Steve Wynn chairman and CEO of Wynn Resorts. “People come to Las Vegas from all over the world to live large and have a good time and we can dish up an irresistible entertainment attraction.”

Yes, this would certainly reinvent part of Las Vegas. The ideas being floated are a little off the beaten path but interesting to think about. Wynn Paradise Park is tentatively scheduled to open sometime in 2020. If plans are approved you will be able to water ski on the Vegas Strip and see an eight-story tall gorilla on the Vegas Strip.