Where To Eat At Park MGM 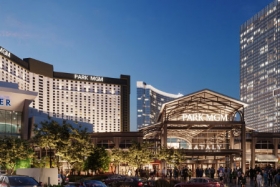 It’s time to look at some of the highlights of Park MGM. We’ve been covering the transformation of Monte Carlo to Park MGM since 2017(!). In early 2018 MGM Resorts said the property was officially Park MGM even though construction wasn’t complete. The majority of the renovations to Park MGM were complete by the end of the year. However, there were still a few restaurants opening throughout 2019. Well, the reinvention of the property is complete and it’s a good time to look at some of the highlights at Park MGM.

The Best Thing About Park MGM

Park MGM has a mostly new casino layout and a very different vibe from Monte Carlo. That was really the purpose of the rebranding and recreation of the property.

Having watched the construction progress almost monthly for two-plus years, it took some time to really notice that this is a new casino. It wasn’t until some friends stayed at Park MGM last year that I finally see the property now that I see it as MGM Resorts intended. It’s no longer “the casino-hotel formerly known as Monte Carlo” in my eyes.

The best feature at Park MGM is its location.

It’s across the street from The Park and T-Mobile Arena. That’s about a two-minute walk from the casino floor. Late last year some friends and I timed the walk from Aria to Park MGM. It fell somewhere between six and 20 minutes depending on how silly we were.

You may remember that Aria has some of the best fine dining restaurants in Las Vegas. The variety of restaurants is also a highlight of Park MGM in a different way. The collection of eateries offers something for every budget and mood.

Park MGM has a rather large selection of restaurants. The casino floor is almost entirely surrounded by restaurants. If you enter Park MGM from the Vegas Strip you have to walk through a restaurant.

Eataly Las Vegas is more of a food hall than a traditional Italian marketplace like other locations in the US. Sure, you can still purchase items to take home but the majority of guests at Eataly inside Park MGM are tourists looking for a place to get a quick bite or drink.

On my last visit to Eataly, a friend and I shared a fantastic charcuterie plate from La Salumeria. I added a cool glass of white wine. It was the perfect way to catch up with an old pal and start another fun night in Las Vegas.

Once you pass through Eataly and walk through the casino, you’ll see restaurants to the left and right of the games. Take a look as we take a walk through Park MGM after passing Eataly to the hotel lobby:

Coffee drinkers – If you’re not fond of Starbucks Primrose has a coffee cart and Eataly has a nice coffee and pastry section that serves Lavazza coffee.