What to expect at Harrah’s Las Vegas 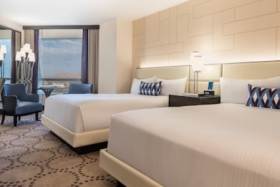 Every year I take a summer vacation (I don’t like the word staycation) on the Vegas Strip. The week away from work gives me a chance to enjoy Vegas like a tourist instead of a resident. It’s like the good ole days when I was an east coaster making a semi-annual visit to my favorite city outside of New York.

This year we stayed at Harrah’s for a week. The choice was simple as it was the only Caesars Rewards (formerly Total Rewards) hotel that offered a nearly free stay. I was looking forward to returning to Harrah’s. This was my first time staying at the casino in about five years and it was both similar and different than I remember.

In 2016, Caesars Entertainment started renovating Harrah’s by rebranding the Carnival Tower as the Valley Tower. The new rooms are a nice upgrade from what they used to offer and appropriate for a mid-tier Vegas Strip property.

The Valley Tower room isn’t fancy but it’s functional and easy on the eyes. The remodeled room is similar to other recent Caesars Entertainment renovations at Planet Hollywood and Paris Las Vegas.

The room design uses clean tones with a pop of color that matches the hotel theme. The bathroom is entirely new with a walk in shower, new sink, and toilet.

The backlit headboard was the most confusing upgrade to the room. There was no visible switch. After passing out with the lights on for a few hours and a call to the front desk for help, my friend finally found the switch that’s hidden on the sides of the end table.

Something new we noticed was that there were teams of two housekeepers working together. Rooms were cleaned quickly every day. This is an improvement for Caesars Entertainment properties which offer hit or miss housekeeping.

The changes at Harrah’s don’t stop with the rooms. Renovations and upgrades on the casino floor continued into 2018. While just about everything was renovated and some new amenities were added, the casino still has a familiar feel and design.

The property looks up to date and not as dated as it did prior to the improvements. New carpeting was installed on the casino floor but the slot and table layout remain the same. This might not be a big deal on the surface but it’s a big change to me. The casino didn’t smell as dingy and smokey as my previous stay years ago.

The new lobby bar and additional Starbucks by the Carnival Court entrance are nice additions. I probably spent more time in the Fulton Street Food Hall than anywhere outside of the renovated sportsbook and my hotel room.

The food hall (food court) has a variety of dining options but I found the best choice to be the salad station. The $15 hand tossed salad was huge, filling and not as heavy as most of the other places to grab a quick bite.

In between Harrah’s and Casino Royale is a great option for anyone looking for a quick cheap meal. The food court has Chipotle, Panda Express and a pizza shop with prices lower than most casino quick-serve restaurants. There’s also a McDonald’s above if you’re into it.

Harrah’s made for a nice home base for my summer vacation. The room was nice enough to lounge around during the day. The sportsbook isn’t amazing but it’s a comfortable place to watch the games and there’s always room at the video poker bar.

We ended up visiting other casinos at night. The location is a quick walk to The Linq, The Mirage, Caesars Forum Shops, and The Venetian. If you’re lazy like me, it’s a five-minute rideshare to the Cosmopolitan, Paris, and The Cromwell.

Diamond level Caesars Rewards members might get a little extra from Harrah’s. Their VIP services department is fantastic and they have my favorite Diamond Lounge in Las Vegas.