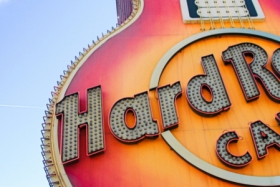 You may be familiar with the Virgin brand name from various ventures. Virgin Hotels is the lifestyle hotel brand owned by Virgin Group founder Sir Richard Branson. The purchase of the Hard Rock was done in partnership with a group led by Juniper Capital Partners and Fengate Real Asset Investments along with their partners Dream, Cowie Capital Partners, and other private investors. Yes, that’s a lot of partners for one Las Vegas casino-hotel.

Transition To Virgin Hotels Las Vegas
The group of investors plans to open a re-conceptualized and revitalized property, the Virgin Hotels Las Vegas, in the late fall of 2019. “Las Vegas has long held a special place in my heart,” said Sir Richard Branson, Founder of the Virgin Group. “Virgin Atlantic and Virgin America have enjoyed flying to Las Vegas for years and I’ve always known that Virgin Hotels could thrive there as well. I’m really looking forward to painting the town Virgin red.”

You’ll have more than a year to redeem players club rewards or points at the Hard Rock. The property will continue full-service operations under the Hard Rock flag until it opens as a Virgin Hotels hotel during the second half of next year.

Virgin Hotels Las Vegas Renovation Plans
Guest rooms, restaurants, and public spaces will undergo a facelift over the next year or so. The renovations are expected to cost in the hundreds of millions of dollars. The final product will be a showcase of Virgin’s signature sleek and stylish design with an eclectic mix of social spaces.

The new hotel will feature 1504 well-appointed Chambers (regular rooms), Grand Chamber Suites and Penthouse Suites; a 60,000 square foot, fully-renovated casino, multiple pools over five acres, world-class restaurants, lounges and bars, including new nightlife venues and the Virgin’s flagship space, the Commons Club, as well as numerous meeting and convention spaces. They haven’t said if Rehab will continue to operate when Virgin takes over.

“Las Vegas is a dynamic city – the people, the excitement, the entertainment. To me, it’s always been the perfect city for our next Virgin Hotel,” said Virgin Hotels CEO Raul Leal. “We are dedicated to delivering the best in design, entertainment, heartfelt service and culinary excellence and we can’t wait to welcome visitors to what is sure to be an awe-inspiring Las Vegas experience.”

Virgin has a unique brand that should offer a different experience for anyone visiting Las Vegas. The hotel and amenities will be slick and beautiful and the operators hope to attract tourists and locals alike. That almost seems like the easy part of this renovation. The casino will be operated by a partner company. They will need to offer good gaming to attract any kind of action from locals who can gamble all over Las Vegas.

The press conference and official press release don’t mention any specific changes. However, they did say that the rock n roll memorabilia was included in the sale. We should expect to see a little rock n roll when Virgin Hotels Las Vegas opens officially in later 2019.