Vegas Loop In The Works? 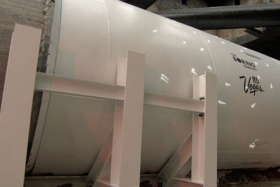 There could be a new underground transportation system in Las Vegas called the “Vegas Loop.” It hasn’t even been a year since we shared information about the people mover at the Las Vegas Convention Center. Construction on that underground system created by Elon Musk’s Boring Company is just about finished. Earlier this year, Resorts World announced plans to connect to the people mover were approved. Now Musk and the Boring Company are looking to expand the transportation tunnel system all around Las Vegas.

Getting around Las Vegas is fairly simple with rideshares and taxis available at every property. The monorail system is a little less user-friendly. The inexpensive transportation is located only behind casinos on the east side of the Vegas Strip from MGM Grand to Sahara.

The monorail station at MGM Grand feels like it’s a mile away from everything. While it does a job of providing cheap transportation, the monorail isn’t great. The monorail doesn’t touch the west side of the Strip where popular casinos like Mandalay Bay and Bellagio are located.

The Vegas Loop will be a first-of-its-kind transportation system for a tourism destination. Much like the people mover loop, the system would use Musk’s all-electric Tesla vehicles to move riders around Las Vegas. The underground tunnel system will offer more convenient transportation. It should also reduce above-ground traffic around the Vegas Strip.

This new system hasn’t received approval just yet. The Las Vegas Convention and Visitors Authority’s (LVCVA) Board of Directors has only shared the initial plans from Musk. The special use permit application delivered to the City of Las Vegas is the first step to move forward. The company also intends to file a land use application in Clark County. These are the first steps in the process to construct the system across Las Vegas.

The potential for this the Vegas Loop sounds great. In a perfect world, this solution would be inexpensive and convenient. It could also have a positive environmental impact with lower automotive emissions due to fewer cars on the street.

How Will The Vegas Loop Work?

As previously mentioned, the Vegas Loop will use all-electric Tesla automobiles to transport passengers around Las Vegas. Since this is an expandable plan that hasn’t been approved yet, there are a variety of stations the Vegas Loop could use.

The current plan calls for the Vegas Loop to reach as far south as Allegiant Stadium near Mandalay Bay. If the entire plan is approved the tunnel system will go as far north as downtown Las Vegas.

“The Vegas Loop will be a game changer for our visitors seeking to quickly access world-class attractions and resorts throughout the destination in a fun and convenient way,” says Steve Hill, LVCVA president and CEO.

“We are very excited about the future of Loop transportation in Las Vegas and are grateful for the enthusiasm shown by Clark County, the City of Las Vegas, the LVCVA, the resorts, and attractions,” Vegas Loop’s President Steve Davis says.

This new transportation system comes from Musk’s goal of solving the problem of traffic gridlock. His desire created a company that builds low-cost, fast-to-build underground transportation systems with the goal of reducing traffic. Even with visitation down, this is still a problem on the Vegas Strip.

The flexibility of this is what potentially could make the Vegas Loop viable. The tunnel system can be built quickly and in small sections. Boring Company says “Building underground has several advantages as tunnels are structurally safe, weatherproof, noise-free and can meet growing capacity by easily adding multiple levels.”