by marc / Tuesday, 21 May 2019 / Blog Category: Entertainment and Everything Vegas.

Upgrades At The Colosseum And Residency Updates 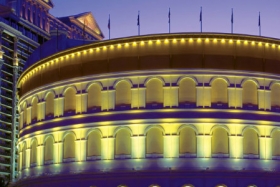 The shows at all Caesars Entertainment properties in Las Vegas have been on the move all year. We’ve tried to cover the Caesars show shuffle but it’s almost impossible to keep up. It looks like things might be under control for one Caesars property in Las Vegas.

Caesars Entertainment recently announced upgrades for The Colosseum at Caesars Palace. While the mainstream media covered the enhancements to the venue they brushed off a major part of the announcement. Caesars signed a deal to bring performers to their venues all over the country.


In addition to breathing new life into The Colosseum, Caesars Entertainment signed a co-promotion deal with Live Nation. While the deal should help all Caesars Entertainment venues, we’re already seeing the impact in Las Vegas. A couple of recent residency announcements will help fill the void left from Celine Dion and Elton John leaving Caesars Palace this year.

Upgrades At The Colosseum

Las Vegas has seen an explosion of music and entertainment venues since The Colosseum first opened in 2003. The Caesars Palace concert hall was originally designed for Celine Dion. Now that she’s leaving they’ll upgrade the experience both on the stage and in the seats. Literally – in the seats.

Caesars Palace will be upgrading all of the seats at The Colosseum. None of the refurbished luxury seats will be more than 145 feet away from the stage. There will also be VIP booths and bottle service similar to the Zappos Theater at Planet Hollywood.

The seats in front of the venue will be removable. This will allow the venue to offer a general admission area for concerts where not everyone wants to sit around. The increased capacity could even lower ticket prices for some shows.

The performers will play on a stage with new lighting and a new 4k video wall to enhance their performance. Additionally, there will be a new state of the art sound system to the shows sound better than ever.

This is the same touring lineup that once had a residency at The Joint Inside the Hard Rock. Steve Perry no longer sings with Journey. Arnel Pineda has been bringing the heat for Journey for more than a decade now and will do so again at Caesars Palace.

Sting will have his first Las Vegas residency at The Colosseum in 2020. His show called “My Songs” will take advantage of the new general admission seat configuration. The new standing room tickets are making this a more affordable Las Vegas show ticket starting at $59.

Unlike Journey, Sting has more than a handful of shows in a single month. The Sting residency will be at Caesars Palace on the following dates next year:

In addition to tickets to see the show, you can purchase meet and greets with the legendary musician.