Uber Is Here And It’s Fantastic 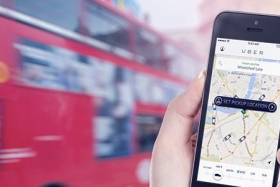 There was a lot of excitement when ridesharing companies Uber and Lyft returned to Las Vegas earlier this year. Ridesharing is a more convenient, and sometimes less expensive, way to have a car get you from point A to point B. The car services act similar to a taxi but they’re procured and paid for through an app. A service that provides convenience and possible cost savings sounds great and I finally got to try it.

The idea of firing up an app to have a car service pick me up in just a few minutes sounds great but I didn’t need it until recently. My car (his name is Big Red) gets me wherever I need to go. Big Red wasn’t an option when some friends recently visited Las Vegas. These friends use Uber often at home so that was usually the first option to get around.

When you open the Uber app you can see how many cars are nearby. If you’re on the Vegas Strip there are usually between 3 and 5 near most hotels. This came in handy at Aria where taxi lines are generally very long. After dinner the crew opened the app and secured two cars. The cars were both waiting at the North Valet by the time we walked from the restaurant. You should note that ride sharing companies aren’t allowed at taxi stands and have their own pickup area.

There is nothing worse in Las Vegas than standing in a long taxi line. Regardless of whether you have a reservation or just want to get somewhere there’s always somewhere to be. Since payment goes to Uber through a credit card on the app there was no actual payment involved which saved a few minutes. There’s also no tipping which saves time. Tipping taxi drivers in Las Vegas can be a headache since drivers may complain or claim they “don’t have any more singles” for change. There was no funny business with Uber on either occasion I used the service.

The two Uber rides were during the first weekend of the National Finals Rodeo in Las Vegas. This brought more people to town than a typical Las Vegas weekend. While the ridesharing companies were getting their feet off the ground in Las Vegas there was a shortage of vehicles which led to higher dynamic pricing. The idea of dynamic pricing is to get more drivers on the road to meet demand. There must be enough cars in service because rates on this weekend used the typical rates (see this post for rates).

Ridesharing will legitimately transform travel around Las Vegas. The car services are more efficient and sometimes less expensive than traditional taxis. Cost savings is great but the convenience of not having to wait in a 30 minute taxi line of 50-100 people after a show is over is possibly the best attribute of the service. Consider me an Uber convert. I’ll use the service anytime I can moving forward.

Related Uber news: They’re now allowed to pick up passengers at McCarran Airport and they’ve reduced rates for uberX and uberXL by 30%.