by marc / Wednesday, 08 May 2019 / Blog Category: Entertainment and Everything Vegas. 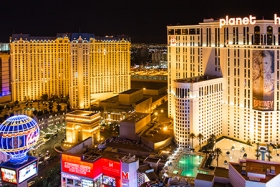 Every year the Las Vegas Convention and Visitors Authority releases a Visitor Profile of tourists traveling to Las Vegas for business and pleasure. There’s a lot of information in the report and it can be quite overwhelming. I like to remove certain sections to make it easier to digest. Today, we’ll look at shows and entertainment.

The last time this question was asked in 2016, 37% of visitors knew which show they wanted to see before landing in Las Vegas. It’s so much easier to purchase show tickets on a mobile phone today then it was back in 2016. Visitors can now book tickets whenever they hear someone speaking positively about an experience. Websites with discount tickets, like TravelVegas, always have access to the best shows 24/7.

Expect this trend to continue unless every single show in Las Vegas ends up selling out well in advance. It should be noted that most shows in Las Vegas don’t sell out far in advance. Shows like Lady Gaga are the exception.

Casinos are not only offering some less expensive entertainment and they’re also offering “free” entertainment in bars and lounges. Some visitors may end up spending money on drinks while watching free entertainment. That’s not entirely a free experience.

Concert venues are also helping lower show prices. Between Brooklyn Bowl, House of Blues, and The Foundry there are plenty of entertainment options under $100. Ticket prices at these venues are often under $50. That’s quite a value compared to spending a couple hundred dollars on a residency show.

Future Of Shows and Entertainment In Las Vegas

It’s almost impossible to keep track of shows in Las Vegas. It doesn’t seem like a week goes by that a show isn’t announced, extended, or canceled. With more music venues and comedy clubs opening there will be more national touring entertainers stopping in Las Vegas while they’re on the road. These ticket prices tend to be in line with other cities.

Residencies continue to shift from years-long ventures to limited engagements. There will be more unique entertainment options that can only be experienced in Las Vegas. Production shows are also changing. The large scale shows are moving from venues that seat thousands to intimate locations that seat hundreds. My favorite show, Absinthe, takes place in a tent outside of Caesars Palace.

Sports is also continuing to grow in popularity. The Vegas Golden Knights are taking some entertainment dollars away from traditional shows and residencies. When the Oakland Raiders move to Las Vegas next year, the same will happen for at least ten weeks every year.

There are more show and entertainment options than ever before in Las Vegas. Viva Las Vegas!