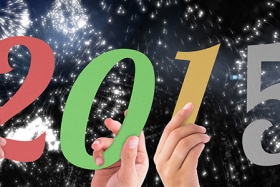 If you’ve been following this blog you know that I am an advocate for planning a trip to Las Vegas well in advance. Planning a trip to Las Vegas early allows you to save money on just about every facet of your trip. Prices on flights often increase closer to flight date. It’s easier to get a reservation at a restaurant or tickets to a show if you plan in advance. While hotel room rates may go down after you book early you have better selection booking in advance and you can always cancel a reservation and rebook at a less expensive rate.

Having said that, we’re heading into one of the busiest weeks of the year in Las Vegas. You’re going to want to make sure you have hotels, restaurant and show tickets reserved sooner than later. The in between Christmas to New Years Day is one of the busiest in Las Vegas. Rooms go from 20%-30% booked in early December to nearly capacity for this week, restaurants are booked and shows are sold out during this week. I’m talking about regular shows and dining experiences. Just wait until we get to the special events for New Years Eve.

If you like DJ’s then you can expect that every nightclub in Las Vegas will have the most famous DJ’s from all over the world performing New Years Eve week. If you like more traditional musicians you can expect to hear announcements from all of the clubs and theaters announcing who’s performing shortly. If you want to eat at one of the great fine dining restaurants that week you might want to reserve a table now. Seriously, head to open table.

Hotel room rates explode the week between Christmas and New Years. Mid-Range room rates go from low double digits in price to low triple digits. If you’re looking for a luxury hotel you may pay twice as much as normal rates. Whether you’re using a discount site or players club promotions you’re going to want to book ASAP. Rooms will sell out and prices will skyrocket.

A major reason why Las Vegas is such a special New Years Eve destination is that there are a variety of unique New Years Eve events. The Vegas Strip hosts countless traditional pop musician and performers, many of which end up on television. The special events are just beginning to be announced. In one of the most unique pairings you can expect to see this year the Cosmopolitan of Las Vegas just announced that Tony Bennett and Lady Gaga will be performing together on New Years Eve. Sure this is a show that will promote the album they released together but it’s an event that you won’t see anywhere else. There will be plenty more announcements like this coming.

This Tony Bennett and Lady Gaga is the first special concert event to be announced for New Years Eve. If you’re thinking of visiting Las Vegas at that time you might want to get serious about your plans now as prices will rise and availability for everything will become limited.