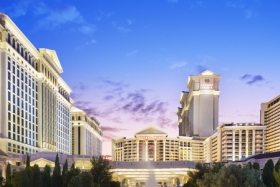 Caesars Palace is one of the most popular casino names in the world. Today Caesars Palace spans 85-acres in the center of the Vegas Strip. The massive casino-resort-mall mega-complex now has a total of 3,980 rooms, including more than 300 suites, throughout five hotel towers. This doesn’t even include the Nobu Hotel inside of Caesars Palace. However, the property started as a simple casino with a single hotel tower and grew from there.

The 22 story Forum Tower was the first new tower in 1979. Caesars Palace really started to grow in the mid-1990s when the 1,181 room Palace Tower was built. Here’s a time-lapse video of that construction that ended in 1997 when the new tower complete with luxury villas first opened.

When you include the boutique Nobu Hotel, Caesars Palace how has a total of six hotel towers.

People visit Caesars Palace for many reasons. The Garden of the Gods pool area is near the top of the list for many returning guests. The pool area spans five acres and offers seven swimming pools.

(Make note of the Palace Tower location. Guests have to walk through the casino to access the pools. The walk to the pool area could take a few minutes depending on the tower.)

The Garden of the Gods Pool has classically inspired landscaping, statues, and fountains. This design provides the old school environment that also has a modern twist.

The Garden of the Gods has a pool area for every mood. The pool options range from a pool that offers a bar, DJ, and swim-up blackjack to mellow pools for those who want to enjoy the sun and a relaxing poolside massage.

Caesars Palace is chock full of dining and entertainment options. However, one of its not-so-secret gems is The Forum Shops at Caesars Palace.

The mall was originally 283,000 square feet and built as an extension of the main hotel and casino in 1992. In 1997 the mall was expanded by adding 35 new shops and two new restaurants. The most recent expansion of The Forum Shops in 2004 added 60 new specialty stores and restaurants. Today there are about 160 retail and dining outlets at The Forum Shops.

The large number and variety of retailers are useful for those who enjoy that activity when visiting Las Vegas. However, that’s not the highlight for me. The Forum Shops has a host of good restaurants. Many of those dining establishments have great Happy Hour deals for inexpensive drinks and snacks.

Even more important than having a centrally located Apple store on the Vegas Strip is that The Forum Shops are a great place to get away from the casino. The large mall offers an escape from the rest of this massive casino-resort. While it’s often busy, it’s a nice air-conditioned change of pace that many gamblers can use.

Want to save on your next trip to Caesars? Check here before you book.