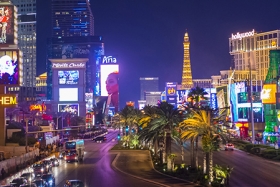 The Vegas Strip March is a tradition that seems to have been around for my entire life. The first Vegas Strip March I first heard about was simply walking from one end of the Vegas Strip to the other while making pit stops at every casino to have a drink. Sometimes the march was one way and sometimes it was a loop to and from the hotel people were staying.


The Vegas Strip March has evolved over the years. Instead of just getting drunk people are choosing to gamble, take pics for the gram, buy a collectible at every stop, and more. Last summer my Vegas Strip March was modified to a smaller Caesars Diamond Lounge (errr…Laurel Lounge) tour. A friend and I stopped at every Caesars Laurel Lounge for a drink and some air conditioning. It was a fun excuse to visit different casinos.

A Vegas Strip March is really just a fun way to explore different properties along the four-mile stretch of Las Vegas. When casinos reopen on June 4, there will be a new Vegas Strip with plenty of holes. Caesars Entertainment and MGM Resorts won’t be opening all of their respective casinos at once.

Caesars is only opening Caesars Palace and Flamingo. MGM Resorts is only opening Bellagio, MGM Grand, and New York-New York. This means that casinos on both the east and west side of the Vegas Strip closed.

When making a Strip March you can do a loop from home base and back or keep crossing the street to knock off every casino that’s open in the order you walk by. I recommend drinkers stick to one side of the Vegas Strip (east or west) and take a car back to home base or wherever you’d like to hang out after drinking and walking for hours.

With that in mind, I’ll break down the new Strip March to the east side (Flamingo) and west side (Bellagio). This should make planning a Strip March a little easier.

There’s a big sense of accomplishment walking four or more miles on the Vegas Strip. The same can’t be said for a downtown Las Vegas casino march. The main strip of casinos around the Fremont Street Experience is a relatively short walk of one mile that’s broken up every minute or so for a pit stop. For comparison, the walk from MGM Grand to Flamingo is more than one mile.

Sometimes we all need an excuse to leave our comfort zone. Marching in and out of the casinos in an area is a fun way to explore Las Vegas.