by marc / Tuesday, 03 September 2019 / Blog Category: Entertainment and Everything Vegas.

The Vegas Strip Is Rockin’! 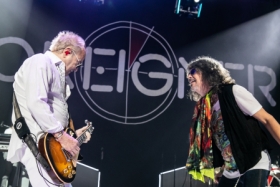 The Journey Las Vegas residency will take place on the following dates in 2020:

Foreigner has ten multi-platinum albums and 16 Top 30 hits. They have been hailed as one of the most popular rock acts in the world. Their variety of hits continue to propel sold-out tours and album sales. Foreigner has sold more than 80 million albums worldwide!

Foreigner is responsible for some of rock and roll’s most popular rock anthems including “Juke Box Hero,” “Cold As Ice,” “Hot Blooded,” “Waiting For A Girl Like You,” “Feels Like The First Time,” “Urgent,” “Head Games,” “Say You Will,” “Dirty White Boy,” “Long, Long Way From Home” and “I Want To Know What Love Is.” Foreigner still rocks the charts more than 40 years into the game with massive airplay and continued Billboard Top 200 album success.

Foreigner’s lineup includes founder and Songwriters Hall of Fame member Mick Jones. He’s the visionary and leader of the band. His stylistic songwriting and guitar hooks keep Foreigner’s influence alive and guide the band to new horizons. However, this isn’t the original band. The current lead singer is Kelly Hansen. Tom Gimbel, Jeff Pilson, Michael Bluestein, Bruce Watson, and Chris Frazier on drums round out the band.

Due to popular demand, Journey has added four new shows to the band’s limited engagement residency inside The Colosseum at Caesars Palace. The new batch of shows will take place during New Year’s Eve week.

First, a reminder that the original Journey Las Vegas residency will take place on the following dates:

The new Journey Las Vegas residency will take place on the following dates:

These two classic rock residencies are just the latest limited engagements featuring music from the 1970s and 1980s.

The longest run from a classic band in Las Vegas this year belongs to Aerosmith. Their “Dueces Are Wild” residency at Park MGM has been extended. The following shows are still to come this year:

Las Vegas continues to offer a wide range of entertainment. There’s something for everyone from pop music on the Vegas Strip to Electronic Dance Music on Fremont Street.