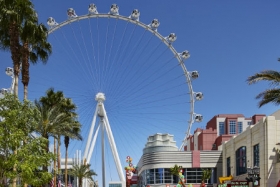 Linq Casino and Hotel has seen a lot of changes since it was the Imperial Palace. The property opened as The Quad in 2012 before becoming The Linq in 2014. The name has seemingly changed again. It’s now known as “The LINQ Experience + Casino.”

We’ll still call the entire property and shopping promenade The Linq. It flows easier. The south side of the casino closest to the shopping promenade has a new look, feel, and amenities. The addition of the Fly Linq zipline and new sportsbook in 2018 were just the beginning.

Re:Match is designed for guests to engage and interact with a unique environment. The first-of-its-kind bar on the Vegas Strip has 27 touch screens that create a cohesive underwater world. Here are some of the experiences at Re:Match. 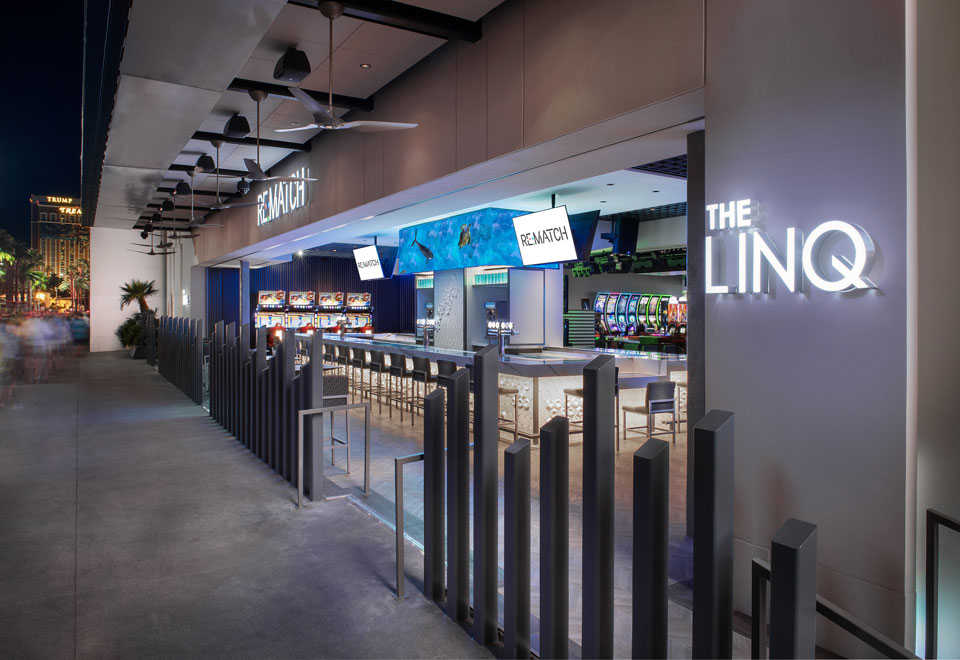 Re:Match is an amazing virtual world of underwater sea life. The bar has virtual sea turtles, stingrays, an octopus, a variety of fish and so much more can be discovered while exploring the virtual ocean display.

Tap the bar top screen if you dare and encounter an overzealous shark, find the lost city of Atlantis or pose for a selfie with a camera-friendly dolphin. Open an oyster because they may contain secrets about the bar or challenge you to social media worthy moments.

Periodically, one of three games will appear at the Re:Match bar screens to challenge those seated around it to a fun competition. Guests at the bar can save the Las Vegas Strip from an alien invasion, catch falling money from Fly Linq riders or capture the most chicken wings in the “Sticky Chicken For President” game. One lucky participant will win a free drink for competing each time a game is played.

Re:Match is another step in a resort-wide transformation that began last fall. Caesars Entertainment continues to use The Linq as a way to explore new ways to redefine the gaming experience. They continue to add state of the art technology, new ways to play, and new experiences to share with friends.

“At The LINQ Hotel + Experience we’ve created a new gaming space by introducing never-before-seen products and games you want to play, share and experience with others–whether it’s a take on your childhood favorite or it’s a first-to-the-market,” said Christian Stuart, Caesars Entertainment Executive Vice President of Gaming & Interactive Entertainment. “Since opening The Book last fall, we’ve seen proven success that guests are looking for that new definition of play– the new experiential casino floor space and Re:Match are just that.”

Located near The Book, Pulse Arena combines Interblock’s electronic gaming machines with an audio-visual entertainment experience. Within the Pulse environment, players can enjoy a variety of electronic casino games either as an individual experience or play socially with friends.

Next to Re:Match you can find all your favorite casino games and more. The casino now has the latest high-tech LED versions of roulette, craps, blackjack and more. They also have new games that feature favorite characters from TV and film.

Seriously, there’s even more new gaming coming to The Linq. Let’s get right to it.

This will be another first-of-its-kind on the Las Vegas Strip. The new hologram gaming experience will challenges guests to test their luck against a hologram. Located in the center of the casino, play one of three different games:

The Linq will have six virtual reality bays. Guests will be able to experience the thrill of becoming superstar DJs in outer space, action heroes saving the world against enemy robots, extreme athletes in a thrilling parkour race, and pro boxers stepping in the shoes of Adonis Creed to bout against Rocky Balboa and others from the Creed Universe.