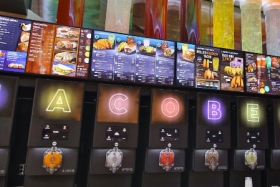 It’s been two years since the first Taco Bell Cantina opened in Las Vegas. The Taco Bell Cantina restaurant at Harmon Corner next to Planet Hollywood has quickly become their busiest location in the United States. The success of cheap eats and booze is no surprise.

Now Taco Bell has revealed the next step in their grand expansion around Las Vegas. The second Taco Bell Cantina location in Sin City will be on historic Fremont Street in Downtown Las Vegas. The schedule shows that this restaurant should open in 2019. 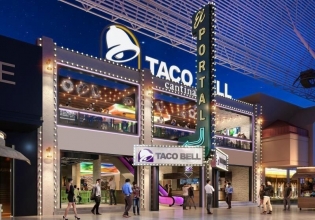 The 6,000 square foot Downtown Las Vegas Taco Bell Cantina (DTLVTBC) will take over a portion of the former El Portal Theatre which closed in the late 1970′s. If you’re not familiar with the old theater, it is across the Fremont Street Experience from The D Las Vegas.

Similar to the flagship restaurant on the Vegas Strip, the new Fremont Street restaurant will have an open-air design. This will make the new location perfect for guests who enjoy indoor-outdoor dining experiences. The design will mirror The D in that there will be a second-floor entry. Guests will be able to access Taco Bell via a lit-up escalator from the first-floor sidewalk.

Upon entering the downtown Las Vegas Taco Bell Cantina, guests will see the restaurant’s open kitchen. This is a Cantina staple that allows guests to see their customized menu items freshly prepared in front of their eyes. I never knew people wanted to watch fast food preparation.

The restaurant follows the brand’s goal to make sure each Cantina restaurant design is unique in a way that represents the local community around it. Customers can then take their open-plated meals to any of the seats in the restaurant, either inside, or on the open-air patio. This could end ugly if food flies over the patio. Visitors to the Fremont Street aren’t always sober.

Sometimes you see a new business open and you know that it’s going to do well. That has been the case with the Taco Bell Cantina on the Vegas Strip. The incredibly popular flagship Cantina location on the Vegas Strip has been renovated and will expand.

Taco Bell Cantina on the Vegas Strip will add an additional 1,200 square feet. The flagship’s expansion adds a brand-new second-floor private space with Las Vegas Strip views. The addition will have a new second-floor bar capable of hosting larger weddings and additional special events. On the first floor, guests will find a larger interior dining area, retail space, and an expanded kitchen and back of house area.

The newly renovated flagship restaurant will also feature state-of-the-art self-order kiosks. These are designed to ensure a seamless and customized customer ordering experience, all at the touch of a button. This outstanding technology is rapidly being added at all fast food restaurants around the country.

“We’ve seen what happens when Taco Bell Cantina meets Las Vegas, and we’re excited to bring that experience to historic Fremont Street along with our fantastic franchise partners,” said Amanda Clark, Head of North American Development. “Our continued growth in urban, high foot traffic destinations and downtowns are a big piece of the growth puzzle as we grow from 7,000 to 9,000 restaurants over the next four years.”