Stadium swim at Circa Las Vegas 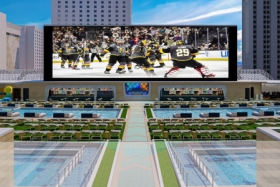 Circa Resort & Casino is very slowly revealing itself to the public. Derek Stevens, owner of The D and Golden Gate casinos in downtown Las Vegas first announced plans for Circa in the beginning of 2019. In December, construction on Circa was halfway complete and the target opening date in December was looking good.

This hiccup changed the opening plans for Circa. The still under construction casino in downtown Las Vegas recently announced that most of the property will open on October 28. The delays building the hotel mean that it will open a few months later by December 28.

“We’re building Stadium Swim to be unlike any pool in existence today and to reinvent the Vegas pool party, 365 days a year,” said Circa’s CEO Derek Stevens. “I can promise there will be no better location in the world to watch a big game than at Stadium Swim – even better than at the game itself. Beyond sports, it will be a great place to catch sun and listen to music, and I believe it will be a destination experience that inspires trips to Las Vegas.” 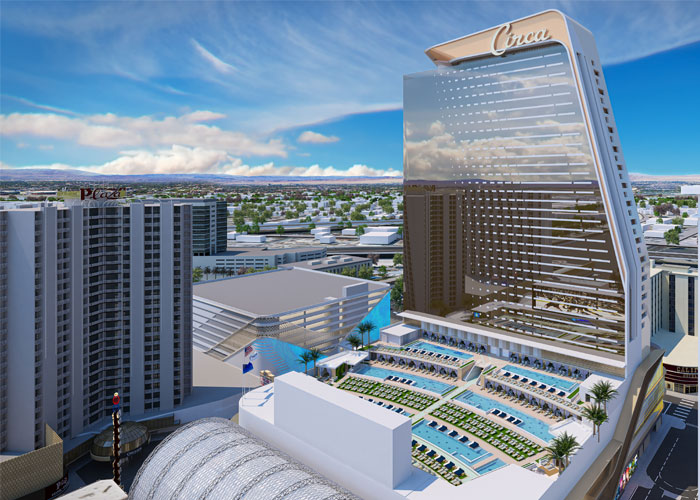 More Than Just A Swimming Pool

The multifunctional pool deck is located on the fifth floor of Circa. It looks south above the Fremont Street Experience canopy towards the Vegas Strip. The pool complex features six pools, a 135 x 41-foot, 14-million-megapixel LED screen, and capacity for up to 4,000 people.

There will be 337 lounge chairs, 38 daybeds, and 30 cabanas at Stadium Swim. Some of those 30 cabanas are massive with a capacity of 25 people. The “Super Cabanas” might make Stadium Swim the perfect destination for groups looking to watch big events like the Super Bowl or March Madness.

While Stadium Swim won’t be home to a dayclub there will be an uptempo atmosphere. Local artists will command the Stadium Swim’s DJ booth with a daily roster of upbeat music. There will be food and drink served inside and outside of the pool. Yes, there will be two swim-up bars on the pool deck’s lower level that will enable guests to order a beverage without leaving the water.

Cleanliness and sanitation have become more important than ever as the world deals with the outbreak of COVID-19. Circa’s team conducted in-depth research on the development of a pool that can self-clean several times a day.

STO Design Group, Inc., Circa’s pool consultant, stated, ”Circa has adopted by far the fastest re-circulation times of any pool in Las Vegas, and has invested in the most effective filter, continuous UV light treatment of all systems, top-of-the-line water chemistry analyzers and chemical feed systems. Together, this will deliver the cleanest and most sustainable pool water in the city.”

Stadium Swim’s water will be fully recirculated four to six times faster than required by codes. Additionally, the pools will all have UVL sanitizers. The technologically advanced devices are designed to destroy pathogens, bacteria, viruses, organic and inorganic contaminants, and greatly reduce chlorine use.