Save More By Avoiding Vegas Conventions 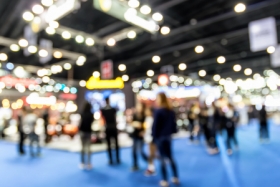 There’s no bad time to visit Las Vegas. However, some days may be better than others. Weekends in Las Vegas can be some of the most fun times in Sin City. There are lots of people visiting and just about every venue has an artist – residency or otherwise – performing. The buzz after an amazing weekend in Las Vegas can’t be matched.

Weekday trips to Las Vegas offer a different kind of fun. There are often fewer people visiting Las Vegas for fun from Sunday through Thursday. Even though there are also fewer performers, Las Vegas can be great during the week.

Things are changing in Las Vegas and the weekday’s aren’t what they used to be. During the week, this town used to be available for anyone to dominate. It was always easy to get around and explore Las Vegas.

Navigating casino because of fewer people was only one reason to enjoy weekday trips to Las Vegas. Show tickets and restaurant reservations weren’t aren’t as difficult to obtain as the weekend. Hotel rooms were almost always less expensive during the week.

However, casino-resort operators are looking to ruin this for tourists looking for less expensive, relaxing Las Vegas experience. These companies are looking to attract more visitors during those slower periods.

Conventions, meetings, and large groups have been a focus of Las Vegas casino-resort operators for the past couple of years. You may not have noticed that convention centers and meeting rooms are being built from scratch or expanding.

Meanwhile, in 2018, MGM Resorts announced a slew of convention and meeting space expansions. Since the announcement, MGM Resorts has upgraded or improved meeting and convention space at Aria, Luxor, MGM Grand, and Park MGM.

Casino-resort owners in Las Vegas love business travelers. Regardless of the size, when a meeting or convention is booked at a hotel the room rates at that property increase. Businesses will often pay a set price for a fixed number of rooms. This reduced capacity and drives up prices for vacationers at that property.

Hotel prices continue to increase as the size of the conference, convention or meeting grows. For example, Las Vegas hotel prices peak during the Consumer Electronics Show (CES).

This year, almost 200,000 people attended CES between Tuesday, Jan. 9 and Friday, Jan. 12. The week of CES typically has the highest hotel prices in Las Vegas.

The difference in weekday rates can vary by almost $1,000 per night if you plan a visit to Las Vegas at when there’s a convention. This Las Vegas Tourism Convention Calendar is a great resource.

The calendar is a great way to see what convention will be in Las Vegas when you’re planning to visit. The December page linked above has a list of 2020 conferences with their expected attendance. The size of the convention is important for city-wide room rates, but larger conferences aren’t the only time hotel room rates will rise.

The ConExpo-Ag Expo in March will bring well over 100,000 people to Las Vegas. Hote rates will be high all over town. The AVN Expo at the Hard Rock expects “only” 25,000 attendees. Still, rates should also be high at that property. The rest of the hotel room rates in Las Vegas shouldn’t be affected as much as the host hotel for the smaller expo.

Avoiding conventions and conferences will often lead to less expensive weekday hotel room rates in Las Vegas. Bookmark this calendar to reference the next time you’re planning a trip to Las Vegas