SLS Las Vegas was sold to the Meruelo Group in 2017. After purchasing the property, owner Alex Meruelo announced a variety of renovations and upgrades for the property. While the first phase of changes was winding down in 2019, Merulo announced that SLS Las Vegas will be renamed Sahara Las Vegas. The reinvention of Sahara will continue through 2020 with new restaurants and changes to the Vegas Strip facing part of the property.

In March, Sahara revealed plans for its continued $150 million property-wide transformation. Additional changes to the Sahara include significant upgrades to the property exterior on the Vegas Strip, all-new restaurants and more.

The biggest change to Sahara will be a fresh new Strip-facing façade. This will include a fully renovated porte cochère and a new digital signage package. A distinctive water feature will serve as the centerpiece of the resort’s main entrance. This replaces the statue that used to be in the turnabout.

The centerpiece of the valet area will have lush foliage and a warm, earthy color palette welcoming guests as they enter the property. The water feature will include dynamic dancing fountains, a negative edge waterfall, and integrated LED technology beneath a 24-foot color-changing chandelier.

The new entrance will have a similar design aesthetic as the rest of the Sahara. Enhancements to the interior entrance include stone tile with brass insets along with glass mosaic flowers. There will also be a detailed 20-foot chandelier with hand-blown glass and 10-foot brass entry doors allowing natural light to shine into the main casino floor.

Resort changes also include the addition of three new dining concepts to the resort’s award-winning culinary program. Popular Philadelphia crab house and sports bar, Chickie’s and Pete’s is expected to open this fall. This will replace Beers & Bets (previously Umami Burger) as the restaurant where the William Hill sportsbook is located. 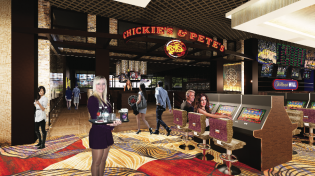 There will also be a small Chinese restaurant concept helmed by renowned Chef Guoming “Sam” Xin. The former Sayer’s Club space will become an Italian restaurant concept. Expect names for both to be revealed soon.

Part of the renovations to the restaurants will include a new Vegas Strip facing facade. For example, the beer garden from the sportsbook area will no longer be an open air space. It will become part of Chickie’s and Pete’s. There will be a new entrance to the sportsbook and restaurant.

“We are pleased with our progress thus far and excited to announce new additions to our transformation timeline,” said Paul Hobson, senior vice president and general manager of SAHARA Las Vegas. “Great care has been taken to incorporate guest feedback into our plans, creating a truly unique, boutique experience right along the Las Vegas Strip. As each new amenity comes online, we continually look to our guests to ensure we deliver upon our promise to create the best guest experience in Las Vegas.”