by marc / Monday, 07 October 2019 / Blog Category: Entertainment and Everything Vegas. 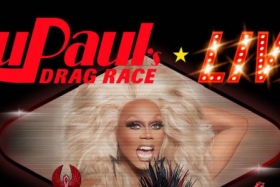 So, you’ve been to Las Vegas a lot over the years and you’re looking for something different. Well, it looks like you’ll find that at the Flamingo next year.

“RuPaul’s Drag Race Live!” opens in late January inside the theater that used to be home to Donny & Marie at the Flamingo. This won’t be another show on the Vegas Strip that looks like every other show.

“RuPaul’s Drag Race Live! is an immersive, interactive thrill-ride for everyone who loves to laugh, dance and sing-along when a fabulous drag queen shakes her padded ass on stage,” says RuPaul.

Each live performance will have with everything you expect from a Vegas adaptation of RuPaul’s Drag Race. The show will have outrageous comedy, eye-popping fashions, over-the-top singing, and dancing, heartwarming moments, plus twists and turns that will leave the audience “gagging” for more.

The atmosphere of the show is interactive and encourages audience members’ participation as if they were attending a live episode of the world-famous competition. The vibe oozing from the theater at the Flamingo should be fabulous.

A Reunion And Something Different

Award-winning choreographer and filmmaker Jamal Sims (Aladdin, Step Up, When The Beat Drops) and RuPaul will direct RuPaul’s Drag Race Live! This marks a Las Vegas reunion for RuPaul and Sims, who first collaborated in 1994 with Sims dancing in RuPaul’s show at the Sahara Hotel.

“We are thrilled to welcome RuPaul’s Drag Race Live! to Flamingo Las Vegas,” said Chris Holdren, chief marketing officer of Caesars Entertainment. “RuPaul’s legacy is rooted in acceptance, diversity, and authenticity. Embracing who you are while having an amazing time could not be better suited for Las Vegas, and we are incredibly proud that the message will find its home at Flamingo.”

“As the entertainment landscape in Las Vegas continues to evolve, we know that the next natural step is bringing a live version of one of the most popular shows on television to The Strip,” said Kurt Melien, president of Live Nation Las Vegas. “An entertainer as iconic to pop culture as RuPaul combined with a property as legendary as Flamingo Las Vegas is the recipe for the perfect Vegas experience, and we know that audiences are in for a night they’ll never forget.”