by marc / Friday, 13 January 2017 / Blog Category: Everything Vegas and Nightlife. 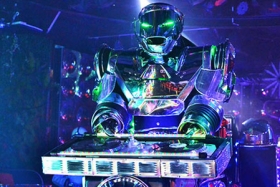 It’s safe to say that I’m addicted to social media. If it’s not on my main screen it’s on a 2nd, 3rd or 4th screen. Most of my obsession with social media is to be on top of everything in Las Vegas (my job) and to keep up with friends (my personal life). There’s a small sliver of my social media spent on hobbies and things unrelated to work.

The other day I was checking out the snapchat of a very funny comedian, Iliza Shlesinger. She’s active on snapchat and typically brings her small dog just about everywhere. She and Blanche amuse me. I happened to be checking the snaps while she was on vacation in Asia. After shuffling through touristy pics and video, I came across the most amazing touristy restaurant I’ve ever seen.

I’m not sure I can describe this dinner experience accurately but here it goes. This is dinner theater with robots. The concept is loosely similar to what Rose. Rabbit. Lie. at the Cosmopolitan tried to do. The idea is to create a unique dining experience before taking in a wild and over-the-top show that you won’t find anywhere else.

The drum solo, dancing, music, battles, animal mascots all make me want to have a few too many drinks and scream. That’s just the show. There’s a whole other dinner and drinks part of the evening. There’s nothing that I don’t like about this. It’s unique and it’s the kind of kitchy spectacle that made Las Vegas famous.

I’ve never seen anything like Robot Restaurant but I sure would like to. However, I don’t want to travel halfway around the world to see it. I want to this in a Las Vegas casino! I’m not sure that there’s an appropriate location for Robot Restaurant in Las Vegas…yet. So, let’s brainstorm a little.

Sake Rok is probably the only truly unique dining experience in Las Vegas. There is no other restaurant experience like it in Las Vegas. In between your sushi dinner there’s a DJ spinning, MC walking the floor, every table drinking sake bombs, there are dance routines and a stage for having random fun with guests. This is a loud restaurant and not a place for a mellow dinner.

Sake Rok is in The Park just outside of New York-New York. The concept doesn’t quite fit the theme of any casino and this is perfect. That’s a consideration for Robot Restaurant. Some larger casinos in Las Vegas like MGM Grand or Caesars Palace might be large enough where the robot theme doesn’t overtake the existing casino environment.

Now that I think about it, MGM Grand might actually be the perfect location for Robot Restaurant in Las Vegas. The casino doesn’t have a distinct theme and is large enough to house just about any concept without changing whatever its core identity might be.

MGM Grand is a casino that caters to a wide variety of customers. The history and brand attracts many people who aren’t familiar with Las Vegas. Hakkasan Nightclub attracts a younger crowd. Maybe Robot Restaurant could be their version of what Tournament of Kings is at Excalibur. While Level Up is geared towards younger millennials Robot Restaurant could attract older millennials and Generation Xers like myself.

I’m a dreamer and I can’t get this restaurant out of my head. The snaps were intriguing enough send me into the great depths google and youtube. If you’re teased a little and want more you can see 20 minutes of the show below.