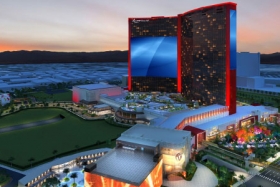 Resorts World Las Vegas continues to take shape. The casino-resort recently revealed plans for “The Theater.” The still under construction Integrated Casino on the north end of the Vegas Strip recently received approval by the Clark County Commission necessary to move forward with constructing a passenger station and tunnel that will connect to the Las Vegas Convention Center (LVCC) campus.

The new people mover tunnel system is currently under construction by Elon Musk’s Boring Company. When completed, this new tunnel project will swiftly transport passengers between the city’s Resorts World and the LVCC via underground tunnels in all-electric Tesla vehicles in under just two minutes.

“We are thrilled to receive approval from the County Commission to move forward with our proposed passenger station and tunnel and are eager to take the next steps in creating an innovative transportation solution for our convention guests and visitors,” said Scott Sibella, president of Resorts World Las Vegas.

This section of the people mover project is an addition to the system that started construction earlier this year.

This will be a unique way to get around the expanded LVCC. Construction on the new “campus” is expected to be completed in early January as originally scheduled. Unfortunately, the people move system might have to wait a while for passengers as the Consumer Electronics Show won’t take place in Las Vegas next year.

The new people mover will help people zip around Las Vegas like never before. This isn’t a train or light rail system. It’s a unique way to travel short distances. Teslarati describes the new tunnel system like this:

The people-moving “Loop” comprises two tunnels underneath the LVCC and ferries visitors autonomously from one end to the other in an all-electric Tesla Model S, X, or 3.

As we previously shared, the innovative transportation system will allow convention attendees to get around the LVCC’s 200-acre campus in just over one minute. The trip to Resorts World would be another minute. That’s all.

The all-electric Tesla vehicles are capable of holding between 3 and 16 people. The system will be designed for ridership of at least 4,400 passengers per hour and is scalable depending on convention attendance. The Boring Company already has a map and plan to expand all the way to McCarran Airport and downtown Las Vegas.

Being connected to the nearby convention center is a pretty big deal for the nearby integrated resort. The expansion of the tunnel system should be big business for Resorts World Las Vegas. The property should high on the list of hotels to stay for anyone visiting Las Vegas for a convention.

Since reopening the Sahara (and previously SLS) has benefited from its proximity to the convention center. Convention and expo guests tend to stay at nearby casino-resorts so they have a short trip to and from work.

Sahara is a short walk to the original LVCC. The new campus will put the LVCC in closer proximity to The Venetian/Palazzo and Wynn/Encore. The Westgate will continue to see heavy traffic for conventions at LVCC since it’s technically the closest property.

Resorts World Las Vegas should be the first property on the east side of the Vegas Strip to feel an impact being connected directly to the LVCC. Not too many convention attendees stay at Circus Circus while they’re trying to entertain clients.

The next step will be for the LVCC to start hosting live events once again.