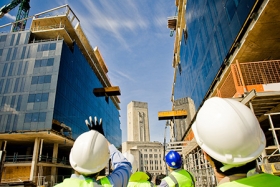 The Cosmopolitan was sold to Blackstone Real Estate Partners last year and they announced that the property would undergo a bunch of changes in order to make the hotel and casino profitable. Those renovations are underway and include the following: Book & Stage is closing to make way for a new lounge concept. Another new hotel lobby bar may also be built. 46 new hotels are currently being built in previously unused space. There will be a new restaurant or nightclub built atop the East Tower of the hotel. Other plans haven’t been revealed by Cosmopolitan yet but they will focus on bringing more life to the casino floor. There are rumors of a new location for the sports book which is currently on the second floor and a new poker room being built but these haven’t been confirmed to actually be happening.

Wynn Las Vegas recently announced that all 2,034 suites in the Encore Tower will undergo renovation this summer. The renovation includes updated furnishings, floor coverings, technology, aesthetics and record-setting custom bed linens with 507 count sheets, the most of any hotel in the world. The room modification includes upgraded 55-inch 4K televisions, as well as enhanced technological amenities such as convenient USB ports and outlets for mobile phones and tablets at bedside and desk with environment controls allowing guests to adjust curtains and lighting from the comfort of their Wynn Dream Bed. New rooms at Encore are expected to be ready this fall.

The Mirage has been slowly renovating their casino floor off and on for the past couple of years. The sports book was upgraded a couple of years ago and looks to have a whole new life to it today. Earlier this year the Poker Room was closed and renovated. The new poker room is smaller and prettier than its predecessor. The casino cashier now occupies some of the space from the old poker room. It was moved to make way for a 5,000+ square foot Center Bar which will give the entire casino floor a new look and vibe. Construction on the Center Bar is happening right now and won’t be finished until fall. Expect a little congestion when playing table games at The Mirage for the next couple of months.

Monte Carlo and New York-New York have both been under renovation for the past couple of years. The goal of the work is to create a synergy between the two properties that lead to a new arena that’s being built behind New York-New York. This park-like area will have new restaurants and bars and it won’t feel as though you’re walking between two hotels as much as will feel like you’re walking through a park type atmosphere that happens to be surrounded by hotels. Eater Vegas is reporting that the Blue Man Group Theater will be demolished to make way for a large concert hall. We should expect many more renovations coming to this part of Monte Carlo before the new arena opens next April.

Mandalay Bay just finished a renovation of their hotel rooms. You can see a preview on their website.