by marc / Tuesday, 24 December 2019 / Blog Category: Everything Vegas and Gaming. 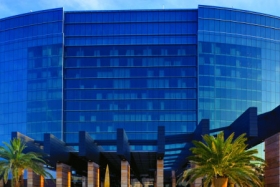 M Resort Spa Casino recently announced an official partnership with the soon to be Las Vegas Raiders. The deal makes M Resort the “Official Raiders Team Headquarters Hotel.” Not coincidentally, the Raiders will practice just a few minutes away from M Resort when they move to Las Vegas next year.


“We are pleased to partner with M Resort Spa Casino as the Official Raiders Team Headquarters Hotel,” said Raiders President Marc Badain. “Some of us have already experienced the first-class service and excellent amenities at M Resort which is in close proximity to our Performance Center, and we look forward to extending those opportunities to others in the Raider family.”

“We are excited and honored to build a long-term partnership with the iconic Raiders organization and look forward to working closely with the team,” said M Resort General Manager Hussain Mahrous. “We are proud to be a part of Henderson’s continued growth as we welcome the Raiders as our neighbors, partners and an extension of our family.”

The Las Vegas Raiders will play home games at Allegiant Stadium. The still under construction stadium is located across the I-15 from the Vegas Strip. It’s a quick walk across a bridge from Mandalay Bay and Luxor. The Hacienda Bridge behind the two casinos will be closed to vehicular traffic on game days to make the walk to the stadium even easier.

Allegiant Stadium is about 11 miles away from M Resort. While the resort is beautiful, it’s not the most convenient for quick travel on game day. Mandalay Bay (along with Four Seasons and Delano inside Mandalay) and Luxor might be the closest hotels to the stadium but there are plenty of others nearby.

There’s a monorail at Excalibur that will drop you off at Luxor or Mandalay Bay at no charge. There are a handful of casinos within walking distance to the monorail:

The following off-strip casinos are a quick taxi or uber from Allegiant Stadium, Mandalay Bay, and Luxor:

There are plenty of lodging options relatively close to Allegiant Stadium. The hotels above are really just the tip of the iceberg. One of the great things about this big little city is that it takes about 30 minutes to travel from one end of town to the other. No matter how much locals might complain about traffic, nothing in Las Vegas is too far away.