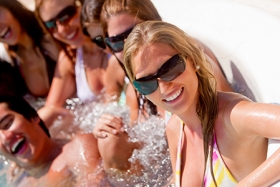 Las Vegas casinos, restaurants, and bars still have capacity limits so don’t expect the same experience as 2019. Casinos were closed just as pool season was about to get underway in Las Vegas last year. While there are restrictions, guests can enjoy a day in the sun anyway.

Wet Republic Ultra Pool at MGM Grand will re-open on March 5 as an extension of the resort pools. There won’t be a typical party with big-name DJs. However, the experience will be a bit different than the regular pools at MGM Grant. This pool will be open supporting customer demand during the summer season.

Reservations for Wet Republic are required for MGM Grand hotel guests. Non-hotel guests will also have to reserve a spot. All visitors must be 21 and over. General Admission is not permitted under current local restrictions. This could change during the summer.

Health and safety protocols are crucial as this and all pools open to the public. Wet Republic will use touchless menu systems via scannable QR codes from cell phones. VIP sections will be separated to allow for physical distancing and rigorous cleaning plans will also be implemented.

Wet Republic Ultra Pool at MGM Grand will be open Thursdays through Sundays from 11 a.m. until close. Visit wetrepublic.com for reservations and more information.

The same company, Hakkasan, operates Liquid Pool Lounge at Aria. This pool will open on March 12. The hours here will be Fridays through Sundays from 11 a.m. until close. Visit liquidpoollv.com for reservations and more information.

Marquee Dayclub at Cosmopolitan is now The Pool Marquee. This is one of the most popular pool parties on the Vegas Strip. The daytime party opens for business on Fri., March 5. The dayclub will be open Fridays through Sundays from 11 a.m. until close.

The Pool Marquee is 21+ as its always been. The party at the Cosmopolitan is exclusively a socially distant poolside environment. Unlike parties in the past guests can enjoy Marquee’s signature food menu, specialty cocktails, and bottle service offerings.

The parties at Marquee won’t feature the typical EDM concerts this summer. However, there will be a slew of resident DJ’s including Dash Berlin, DJ Mustard, and Cedric Gervais.

Encore Beach Club is also opening this year with a different name and vibe. Expect a slightly more mellow experience at the ECB Pool at Wynn Las Vegas. The ECB Pool will open for the season on Fri., March 5.

Similar to most other Las Vegas dayclubs, ECB Pool will be open Fridays through Sundays from 11 a.m. until close. EBC Night may open later this year.

Daylight Beach Club at Mandalay Bay also opens for the year on Fri., March 5. Daylight typically offers rap concerts in addition to normal dayclub festivities. The dayclub hasn’t announced entertainment yet. Daylight Beach Club will be open from Fridays through Sundays this summer.

Virgin Hotels Las Vegas and Resort World Las Vegas will both have dayclub experiences when they open. Expect to hear news about both clubs soon.