New Pool At The Plaza To Celebrate Grand Opening July 2 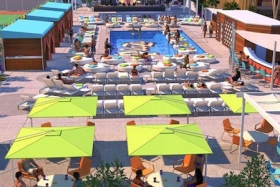 The Plaza in downtown Las Vegas has been building a new rooftop pool for the past couple of months. The wait is almost over for its grand opening which will be celebrated on July 2. The rooftop pool deck will offer more than just a pool. The new pool area will offer private cabanas, several lily pad daybeds, a 12-person hot tub, performance stage, a bar, gaming, tennis, basketball and pickleball courts, a food truck and more.

This multimillion dollar renovation to the pool area is a major step up for the Plaza. The entire renovated pool deck encompasses approximately 70,000 square feet, making it one of the largest in downtown Las Vegas. The Pool at the Plaza will be a “retro Palm Springs meets classic downtown Las Vegas” inspired outdoor space.

There will be six cabana suites available for rental that will offer a private poolside retreat. Each cabana suite will have a television, fan, refrigerator and safe along with a complimentary fruit plate and cheese and cracker tray. The cheese might be a bit much when it’s 115 in the shade but a nice cold fruit plate on a hot afternoon sounds like a nice snack.

The renovations also refurbished adjacent tennis and basketball courts and added dedicated pickleball courts. The Plaza is the only hotel-casino in Las Vegas with dedicated courts for this fast growing sport. If you’re under 50 you might have never heard of pickleball. You can learn about the sport here and from the video below (this is fascinating!).

Pickleball won’t be a game changer but it seems like something that might be in demand with older customers at the Plaza. Pickleball could be a difference maker for an older customer deciding where to stay when looking at the different downtown Las Vegas hotels.

The Plaza plans to offer a diverse lineup of live entertainment at the performance stage including DJs (weekends only), concerts and special events. The only other downtown Las Vegas pool with a similar entertainment space is Citrus at Downtown Grand.

The food truck will offer its own menu alongside dishes from restaurants inside of the casino like Pop Up Pizza and Zaba’s Mexican Grill. The food truck’s own unique menu will feature seaside street food inspired by classic California dishes, such as ahi tuna poke lettuce wraps, crispy rice paper tacos and lobster rolls.

The new pool at Plaza is part of a growing pool scene in downtown Las Vegas. The pool at the Golden Nugget was the only desirable pool option in the area for the longest time but that’s changing. Citrus at Downtown Grand and the Pool at Plaza both offer new alternative destinations for anyone that stays in downtown Las Vegas looking for a pool. When Las Vegas Club is re-opened as a new hotel in a couple of years it will likely also offer an upgraded pool experience.