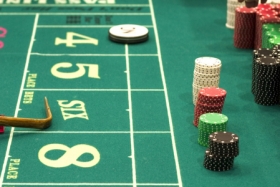 An important part of the fun of visiting Las Vegas is still gambling. Between the complimentary drinks and action on the table or machine, there are plenty of good times. I’ve gone through the ringer trying to find my favorite casino game(s). When I first started visiting casinos I played blackjack because it’s a simple game that all of my friends played. My preference in games has changed over the years but I still have one love in the casino.

Gambling is a social activity and for a while, I thought I could only get that from playing a game with my friends. After spending time in casinos I was drawn to craps. The game is unlike any other in the casino. There’s often a raucous crowd standing around a long oval-shaped table. The craps table is full of numbers that didn’t make sense at first and I was a bit intimidated to ask how to play.

I had a few drinks one night at the Hard Rock (RIP) and decided to give craps a chance. The action was amazing. The camaraderie around the table was unlike any other game in the casino. I was hooked on craps after playing once!

I recently saw a Saturday Night Live sketch featuring Daniel Craig (James Bond) and was reminded how much I love craps. The video below is stereotypical and an embellishment of what the game is really like. The craps table is a scene, man.

One of the main reasons people are intimidated by craps is because there are so many betting options. You can see an intro to craps here if you’ve never played before.

Playing craps can seem overwhelming when you add 12 people or so waiting for you to place a bet before the shooter can roll the dice. The first time I played craps, I just kept it simple with a single passline bet. All these years later I only place two bets for most rolls and maybe a third if I’m feeling sassy or have had a few drinks.

My goal with all gambling is to be smart and have fun. This means playing fun games while seeking out the bets with the lowest house edge for the casino. The lower the house edge, the longer the bankroll should last. The longer your money is in play the more time there is for fun.

Here are my simple craps bets that I still play today:

That’s it. At most I have a wager on three different numbers that I need the shooter to roll. I’ll have whatever the point is set by the shooter and either two Come bets (numbers the shooter rolls) or the six and eight.

It’s important to use the “free” odds when you have the chance. The free odds bets have no house edge. This brings down the overall house edge for the wager. Even though it’s extra money being gambled, it’s smart money that in time should only help a bankroll last longer.

This gives me enough action on the table with a low house edge (less than 1% each). These are among the best bets in a casino. The low house edge should allow a bankroll to last longer over time which should also lead to more fun.

The bets above are the base for my action at the craps table. As I mentioned, every now and again I’ll place another wager or two to spice things up. On occasion, I look to the middle of the table to make a small wager $1 or $5 on a hardway.

The house edge on a hard 4, 6, 8, or 10 is 2.78%, according to the Wizard Of Odds. While this is much higher than the base bets it’s not the worst bet in the casino. Despite the larger house edge, hardway bets can be a fun addition because they last until that number is rolled.