Piano Bars For Everyone In Las Vegas 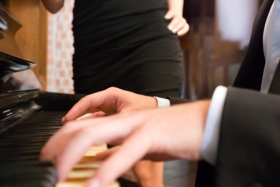 Entertainment in Las Vegas comes in all varieties. You can see a big production show on the Vegas Strip, catch a band perform for free at the Fremont Street Experience in downtown Las Vegas and even head out to one of the biggest and best nightclubs in the world. There’s something for every mood and taste.

Somewhere in between everything else, Piano Bars remain a popular form of entertainment in Las Vegas. Like the general entertainment, there’s a nice variety in piano bars. Dueling pianos bring the party while some piano bars are just simply relaxing. Here’s a look at some different piano bars in Las Vegas and what you’ll find at each.

This is one of the most popular piano bars in Las Vegas in part because of its location right on the Vegas Strip. Sure the Piano Bar offers a lively Dueling Pianos show with identical twins Kim and Tamara Pinegar, but that’s really just the beginning. In addition to other forms of entertainment at the Piano Bar, this is also one of the few bars on the Vegas Strip where you can sing karaoke. You can find more information here.

The Bar at New York-New York

This bar is billed as more than a piano bar, but that’s what it is. If you don’t mind standing to watch the show, entry is free. If you want to sit down, you’ll have a pay a small cover charge (usually somewhere between $5 and $20). There’s almost always a line to get in when the dueling piano shows are happening. Other entertainment here includes a saxophone player and solo piano players. Pro-Tip: There are a few seats on the casino side of the bar with video poker. Throw a few bucks in the machine for a little gambling with a side of entertainment.

Every piano bar has something to separate it from the other bars. Napoleon’s encourages you to sing along with the dueling piano show. This bar has more of an upscale lounge feel and there are cocktails, cognac, scotch, whiskey, French wine and bourbons to compliment that vibe. The entertainment at Napoleon’s starts at 6 p.m. and ends at 2 a.m.

Petrossian at Bellagio and Eastside Lounge at Encore

Each of the previous piano bars listed above is for partying. The Eastside Lounge and Petrossian Bar are both lounges where you go to relax, enjoy a cocktail and take in some mellow music. You might be done with the party or it might just be too early to start the party. Both are great options if you just enjoy live music in the background while hanging out.

This is an open-mic piano bar. Take the stage or just let other people entertain you. The crowds in downtown Las Vegas can get a little rowdy so proceed with caution. Kidding. Kinda. PARTY!