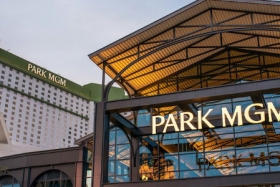 The transformation of Monte Carlo to Park MGM was supposed to be finished by the end of 2018. NoMad, Eataly, and the new nightlife venue On The Record all opened just as the year ended.

Well, 2018 ended and work continues inside Park MGM. Another restaurant, The Crack Shack recently opened. A new mezcal bar, Mama Rabbit, also opened in late August. Meanwhile, one of the first venues to open at Park MGM – Moneyline Sports Bar and Book – closed for renovations and will reopen in time for football season.

During its second-quarter earnings call, MGM resorts CEO Jim Murren said that Park MGM is ramping up slower than expected. He went on to say that Eataly and NoMad are doing well. Unfortunately, business in the casino is slow despite plenty of foot traffic from events at T-Mobile Arena.

Expect to see changes to Park MGM for the next year or so while MGM Resorts figures out exactly what its customers want. In the meantime, here’s some information on the newest venues you can check out during your next visit to Park MGM

The Crack Shack is a gourmet fried chicken eatery known for one-of-a-kind menu items. The restaurant was created by CEO Michael Rosen and celebrity chef Richard Blais. This is a three-meal casual dining venue.

“The Crack Shack will be an engaging, fun and delicious addition to our resort’s dining program,” said Patrick Miller, president & COO of Park MGM. “The come-as-you-are vibe along with reimagined classic comfort food and craft cocktails will give guests another dining option certain to be memorable.”

Blais said, “Las Vegas is such a remarkable dining destination and I have dreamed of opening a restaurant here for years. Our main goal is to create an enjoyable environment for our guests where they can experience high quality and fun food in a city known for supporting that very thing.”

You’re probably curious about the name. Well, the inspiration for Mama Rabbit is the legend of Mayahuel. She was the goddess of agave and fertility. She’s said to have had 400 rabbit children and nourished them with mezcal and tequila. Over time, those rabbits came to symbolize the entire spectrum of feelings one experiences while embracing the spirits.