Must see renovations at the SLS/Sahara 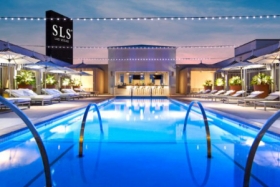 SLS Las Vegas is coming to the end of a $100 million property-wide renovation. The most recent upgrade at the hotel-casino is the addition of Casbar. The new 24-hour lounge features unique craft cocktails and seating areas perfect for keeping an eye the action from the casino floor. The new lounge compliments the renovations on the casino floor that guests have seen taking place since last year.

In fact, the new lounge will fit in perfectly with the new/old name change that was recently announced. Beginning this fall, SLS Las Vegas will return to its roots and become Sahara Las Vegas.

The Creation Of SLS Las Vegas

SLS Las Vegas opened in 2014 using the bones from the original Sahara Hotel and Casino. The reconfigured and re-imagined casino was sold to the Meruelo Group in June of 2017. After making the purchase the new owners announced a plan to upgrade and renovate the casino and hotel.

The changes quietly got underway in late 2018 when they decided to part ways with Starwood Hotels and rebrand the W Hotel as their own. The small change was just the beginning as the new owners began upgrading some hotel rooms, bars, and the casino floor.

The hotel improvements include enhancements to the Story and World Towers elevator lobbies and room corridors as well as remodeled rooms. The W hotel tower is now the Grand Tower. These rooms and spa will also see upgrades. Even though there are changes, The Grand Tower maintains its AAA Four Diamond status along with a private hotel entrance.

“Mr. Meruelo is a visionary who pays close attention to detail. The guest experience is very important to him and those considerations are absolutely reflected in our design,” says Nancy Paolino, founder and chief creative officer for Innovativo Design Inc., whose team is behind the redesign and construction of SLS Las Vegas as well as Grand Sierra Resort in Reno, NV (also owned by the Meurulo Group).

One of the complaints since SLS Las Vegas first opened were about the high black industrial ceilings. The massive 60,000 square-foot casino floor has a new feel. The casino floor now has a bright, modern atmosphere with glamorous finishes.

“Our culinary program is truly second-to-none and we look forward to launching this new concept in addition to continuing to enhance and elevate the offerings across our portfolio of dining venues.” SLS Las Vegas also offers new cocktails at their award-winning restaurant, Bazaar Meat by Jose Andrés.

The other restaurants remain intact for the time being. However, Vital Vegas is reporting that Cleo will be closing later this year. That would be a shame as it’s a great restaurant and one of the best values on the Vegas Strip.