by marc / Thursday, 13 February 2020 / Blog Category: Entertainment and Everything Vegas. 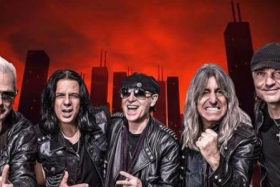 Wynn Las Vegas and Planet Hollywood both announced Las Vegas residencies for rock performers made famous in the 1980s. Bryan Adams will be performing a limited engagement at Wynn while the Scorpions will perform at Plant Hollywood. These two residency announcements came as a surprise to some.

Over the past few years, marketing executives in Las Vegas have been trying to find a way to attract millennials to casinos. Artists made popular nearly 40 years ago doesn’t scream “millennial.”

Truthfully, these elder Gen X performers shouldn’t be a surprise to anyone who reads this blog. Way back in 2017 and 2018, we realized that there was a slew of entertainment geared to classic rock fans visiting Las Vegas. Last year Caesars hosted Journey for a limited engagement at Caesars Palace. This year the casino-resort will welcome Sting for a residency.

It might seem like a surprise but casinos can do two things at once. While the marketing departments are still trying to figure out what younger millennials want in Las Vegas, the casino show producers know that Gen X visitors have money and are willing to spend it.

Casino operators always have to balance their focus on today’s guest and the visitor of the future. Surprisingly, this isn’t an easy task and there are a lot of misses with the customers of tomorrow.

Concerts and limited engagements featuring classic rock and metal bands will continue to pop up in Las Vegas. This summer, two vintage rock artists will appear on the Vegas Strip.

I’ve shared this recently on twitter, but Bryan Adams is a special artist to me. He performed at the first three concerts I saw. Two shows were headline concerts and one was part of a radio show. This spring, the Canadian singer-songwriter will make his Wynn Las Vegas debut with his “Shine A Light” tour. Adams will present his songs in a three-night engagement from April 22-25.

The “Shine A Light” tour is named after his 14th studio album that debuted at No. 1 on album charts last year. During his influential four-decade career, Adams has collaborated with iconic performers such as Barbra Streisand, Bonnie Raitt, Rod Stewart, and Sting. More recently he performed with pop music superstars such as Ed Sheeran and Taylor Swift.

Bryan Adams is expected to play his popular hits including “(Everything I Do) I Do It For You,” “Summer of ’69,” “Heaven,” “Cuts Like A Knife,” “Shine A Light” and more. Truthfully, nothing will be better than when he sang “Straight From The Heart” to my section of fans during a concert in Long Island, NY.

Last year I was speaking with a friend who was considering flying to Europe if the Scorpions announced tour dates. Well, he was very excited to hear that his flight price and time in the air was reduced greatly. Caesars Entertainment recently announced that the Scorpions will be performing a residency at Planet Hollywood this summer.

The Scorpions are gearing up for their 55th anniversary. The Scorpions are considered one of the most iconic and influential hard rock bands of all time. The exclusive headlining residency show at Zappos Theater inside Planet Hollywood.