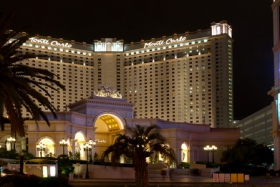 Back in July, we told you that Monte Carlo would be renovated and become Park MGM. The renovations would take place throughout the next couple of years and be finished in 2018. MGM Resorts doesn’t have plans to close the property during the renovations so you’ll see much of the facelift happening when you visit. The plan is to close certain parts of the casino and hotels to renovate while the rest of the property remains fully operational. A complete timeline of construction hasn’t been released.

However, the first batch of closures has been announced. You may not notice these renovations unless you’re looking to take a swim this fall. The pool area, the shopping area and The Pub will all be closing for good on October 3rd, 2016. The shopping area, known as Street of Dreams, is also the walkway to from Monte Carlo to Aria and vice versa. This path will be open during construction. The pool at Aria will likely be the best and closest pool if you’re staying at Monte Carlo.

If you’d like to use a pool after October 3 you’ll have to check with the front desk for options. According to MGM Resorts, all guests will be given access to pools at other MGM Resorts properties. The different options will be provided when you check-in to Monte Carlo. If you’re a beer drinker, who loved The Pub you can still grab a good beer at Beerhaus, across the street at The Park.

Renovations at Monte Carlo will continue for the next couple of years. Expect to see the hotel closing one floors at a time for the long overdue room renovations. You won’t have to wait for the entire renovation to see the new rooms at Monte Carlo/Park MGM. Upon completion, the rooms should be beautiful. MGM Resorts has stated that they intend to make Park MGM a high-end resort.

In addition to renovating Monte Carlo, they’re also bringing in a couple of partners that will give the property an entirely new feel. The plans include a renovation and rebrand of the property that will cost approximately $450 million. The renovations will include just about every element of the property and will offer two distinct hotel experiences. Hotel 32 will close and NoMad Las Vegas will open 292 rooms at Park MGM.

In addition to the hotel, NoMad will have a restaurant by chef Daniel Humm and restaurateur Will Guidara, a NoMad casino, a pool and its own entrance. There will be an air of exclusivity and privacy at NoMad Las Vegas.

MGM Resorts is also bringing Eataly to Park MGM. Eataly is the largest Italian marketplace in the world. They already have locations all over the world including New York and Chicago. Specific details on Eataly Las Vegas haven’t been released yet. This will certainly be a new concept for the Vegas Strip.

Technically, work is already underway at Monte Carlo. The Park Theater was the first venue to get a makeover. This will be an integral part of what Park MGM is when it opens. If you are a fan of the Monte Carlo, you might want to grab a casino chip or another souvenir the next time you visit.