March Is Madness In Las Vegas 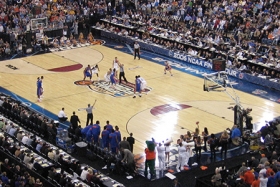 
The madness actually begins in Las Vegas before the NCAA basketball tournament begins on March 17 with play-in games.

The real madness in Las Vegas starts at the beginning of March with conference championship tournaments. Not only can you watch men’s and women’s college basketball tournaments in person, but you can wager on the games in the casinos. Actually, you don’t even have to go into a casino to wager with a mobile betting app. Mobile betting works anywhere in the state of Nevada. You can wager from a game, pool, while shopping – wherever you happen to be.

The dates for the different college basketball conference tournaments are below:

The week before March Madness has become a favorite of basketball fans and bettors alike. Conference tournament week is a fairly normal time in Las Vegas. It’s easy to find a seat in a sportsbook. There aren’t lines to wait to place a wager. Prices aren’t increased to gouge the larger crowds in Las Vegas for the first weekend of March Madness.

The first weekend of March Madness in Las Vegas is insane. Like bananas. Hotels will be sold out or near capacity. I recommend making reservations before 2020. Rates will continue to increase as there are fewer rooms available. Even casino discounts and comps will be gone before the NCAA tournament unless you’re a legitimate high roller.

Restaurants – especially steakhouses – will be full in advance of the weekend. The first weekend of March Madness brings lots of men to Vegas. Dudes love a good steak. Just about every entertainment venue will be packed with many popular shows or concerts selling out in advance. I haven’t even mentioned the basketball games being played.

For example, Caesars Palace only allows guests to sit in its sportsbook if they’ve paid to reserve a seat in advance. Bars and restaurants might require a reservation that has a minimum spend on food and beverage for the games.

Public seating is so limited that many casinos have watch parties. Depending on the casino the price can range as high as a couple of hundred dollars per day. There are options away from the Vegas Strip that will don’t have fees for the parties.

There will be lines to wager on March Madness games. I strongly recommend funding a mobile wagering account to you can bet from your phone. This cuts down on the standing around. Nobody visits Las Vegas to stand around.

There’s nothing like watching and wagering on college basketball in Las Vegas during March Madness. Even though you can bet on sports in other locations, the casinos and entertainment venues step their games up.

Better entertainment after the games are over is one reason to visit Las Vegas during the first weekend of March Madness. It’s also Spring Break for many colleges. The games are fun, but you can also enjoy fun in the sun if you need a break from the madness.