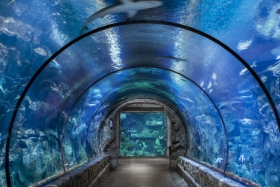 There are new attractions opening in Las Vegas regularly. We try to keep up with everything new but sometimes it’s useful to look at the timeless attractions in Las Vegas. Thankfully, there are still plenty of popular attractions that have stood the test of time.

The Shark Reef Aquarium at Mandalay Bay is expanding its underwater journey to include an immersive virtual reality theater. Opening in mid-March, the Ocean Explorer Virtual Reality Theater will take guests on a new, unforgettable underwater voyage through two live-action films and interactive exhibitions.

“Swimming with Humpbacks” follows the journey and behaviors of mother humpback whales and their calves as they migrate during mating season. “Shark Dive” takes guests to Tiger Beach, a mythic underwater strip in the Bahamas where some of the world’s largest apex predators amass including tiger sharks and hammerheads.

“For years, our guests have been fascinated and intrigued by the beautiful living creatures that call Shark Reef home,” said Adrienne Rowland, director of animal care at Shark Reef Aquarium. “Now, with this immersive and interactive experience, they can discover and appreciate our oceans and animals in a whole new way.”

The Brains Behind the Addition

The new virtual reality installation is a partnership between the Shark Reef Aquarium and the Immotion Group. The latter is considered the global leader in immersive virtual reality experiences, with studios in the U.K. and California.

Rod Findley, commercial director for Immotion Group, said, “Not many people can say they swam within a few feet of a humpback whale or tiger shark in the wild. With our immersive VR technology, we’re offering guests that kind of bucket-list experience. We think our attraction, with its interactive pre-show and motion-platform theater, builds on what Shark Reef Aquarium already offers and adds another exciting dimension for visitors.”

Shark Reef Aquarium at Mandalay Bay is among the most prestigious animal facilities in the world. It’s the first and only Nevada institution accredited by the Association of Zoos and Aquariums (AZA). There are more than 2,000 animals on display at the Shark Reef Aquarium. Altogether, there are 100 species including 12 species of sharks.

Save time and get your tickets here for the Shark Reef Aquarium online before you go.

Are You Ready For Some Football?

Mandalay Bay is getting ready for the influx of sports fans with some upgrades and additions. Last year, MGM Resorts upgraded the video screens in the sportsbook. Don’t be surprised to see more upgrades before the Raiders season begins.