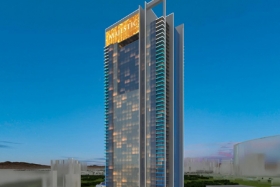 There are always big plans for Las Vegas. Majestic Las Vegas is the latest project announced for Sin City. We have a while before it is scheduled to open. The new non-gaming luxury hotel is set to see its first guests in 2023.

Well, Resorts World once again broke ground in 2015 using the structures already built. The property is still under construction. Plans for the casino have changed numerous times. The scaled-back Resorts World Las Vegas is scheduled to open in late 2020. I’ll believe it when I see it but that’s a different story.

This year we’ve seen numerous new projects revealed but not too much construction. On the plus side, SLS Las Vegas is once again Sahara. Renovations are nice but new construction is the best.

Personally, I’m looking forward to a brand new casino in downtown Las Vegas with a massive sportsbook, 10x odds on craps, 3:2 blackjack and numerous dining outlets. Now comes an announcement about a new non-gaming hotel being built near the Vegas Strip and I’m all about it.

Majestic Las Vegas has received all of the necessary approvals and is now set to break ground in 2020. The $850 million-dollar, 620-foot-tall contemporary architectural jewel is scheduled to begin construction in May 2020. The project is slated for completion in early 2023.

Six standalone restaurants from world-renowned chefs are planned for the new hotel. They’re also planning a lushly landscaped pool area with 50 cabanas and an area for live entertainment

Most importantly, Majestic Las Vegas will focus on the best in health and wellness. The four-level, 70,000 square foot world-class fitness, nutrition, and med spa facility promises to be the finest of its kind anywhere. The property will serve as a state-of-the-art medical wellness destination.

Not only will Majestic Las Vegas offer indulgent body treatments and activities such as yoga and spinning, but it will also have such amenities as personal nutritionists and comprehensive executive physicals.

Businesses might want to plan group trips to Majestic Las Vegas. They are building corporate Sky Suites on levels 51 to 60. These Sky Suites will serve as the perfect corporate home for tech, entertainment, or sports companies in Sin City for a meeting or convention.