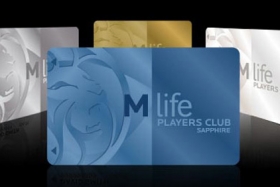 Casino loyalty clubs (commonly known as players clubs) are a great way to receive discounts and comps in Las Vegas. Earning rewards in Las Vegas that can only be used in Las Vegas isn’t convenient for most people who travel to Las Vegas. Thankfully, there are multiple casino operators that have casinos in Las Vegas and around the country. Not only can you earn and redeem points close to home but you can keep your account active by visiting local casinos in between visits to Las Vegas.

M Life Rewards is their loyalty club that was mostly used only in Las Vegas. That started to really change in the past couple of years as they’ve added new M Life Rewards properties in the United States and around the world.

Shortly before MGM National Harbor opened, MGM Resorts International announced they were purchasing the remaining half of the Borgata in Atlantic City, NJ that they didn’t own. This purchase allowed Borgata to become another M Life Rewards casino on the east coast after the purchase was completed in 2017.

Most recently MGM Resorts International announced that they’ve acquired Empire City Casino in Yonkers, New York. This will be another departure for MGM Resorts as this casino is part of a horse race track and doesn’t have a hotel, multiple dining options or any resort like amenities. Many see this as an acquisition so MGM Resorts can offer sports betting to customers in New York state. Regardless, this will become an M Life Rewards property in 2019 when the deal is complete.

MGM Resorts Around The World

MGM Resorts International is a global company with casinos and hotels around the world. M Life Rewards may be earned and used at casinos such as MGM Cotai and MGM Macau. The MGM Resorts International loyalty club is also connected with Diaoyutai Hotel Hangzhou, Diaoyutai Boutique Hotel Chengdu, and the brand new Bellagio Shanghai. You can read about the newest non-gaming Bellagio here.

M Life Rewards was already one of the most useful loyalty clubs in Las Vegas with access to so many properties. The addition of casinos and hotels all around the world make earning points to use for discounts and comps for shows, restaurants, etc. easier than ever.