Let’s not forget about Treasure Island 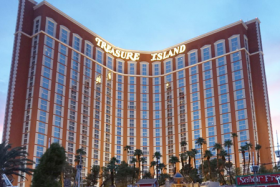 Treasure Island seems to be a forgotten casino on the Vegas Strip. The property was created by Steve Wynn and opened in 1993. Treasure Island isn’t quite old but it isn’t new. Longtime visitors to Las Vegas probably remember Treasure Island for its campy Siren’s Pirate Show that was canceled a few years ago.

The pirate cove in front of the casino is smaller now. Some of the space has been used to make room for the addition of a Walgreens and entertainment space that’s being used for the Marvel Avengers S.T.A.T.I.O.N. attraction. In recent years, the property has lost much of its nautical theme although guests can still see some of the theme walking through the property.

Treasure Island has become a value property that families have come to embrace. The property is located on an opposite corner from The Venetian and Wynn Las Vegas. It’s connected to The Mirage by a mini-train that will save visitors a five-minute walk next door. (The train is closed when The Mirage is closed).

The prices at Treasure Island stand out in part because of the luxury properties across the street. While The Mirage isn’t in the same luxury category, it’s not close to being a “value” property.

Hotel rooms, restaurants, and bars all have less expensive prices than the neighboring properties.

What might stand out most at Treasure Island today is the gambling rules and odds. The casino has among the best low-roller blackjack rules on the Vegas Strip. Additionally, it seems as though there has been a lot of slot machine jackpot wins.

Treasure Island not only offers fair prices for families but the casino offers great value for gamblers. Blackjack players who prefer to spend less than $25 per hand can find some of the best games on the Vegas Strip at Treasure Island.

Vegas Advantage visits every casino in Sin City to compile its annual Las Vegas Blackjack Survey. Once again, Treasure Island is among the best on the Vegas Strip:

Treasure Island is one of the best casinos for low limit blackjack on the Las Vegas Strip. The $10 3:2 six-deck tables have double down before and after splitting, surrender and re-split aces. This game stands on all 17’s for $50 in high limit. The double deck games pay 3:2. A $15 game pays 3:2 and allows double down before and after splitting. There is a $50 version of this in high limit that stands on all 17’s. Single deck is available for $15. It pays 6:5.

To summarize, Treasure Island has multiple games with a minimum bet under $25 that pay 3:2 when a player is dealt a natural blackjack. This kind of blackjack game at the low price point is rare on the Vegas Strip.

Treasure Island has a new Golden Circle sportsbook, bar and restaurant in addition to great blackjack games and slot machines that seem to be paying out jackpots frequently. This bar/restaurant/sportsbook combination has become increasingly popular over the years.